Why Melaye asked Buhari to apologise to NASS over statement

Why Melaye asked Buhari to apologise to NASS over statement

ABUJA—CHAIRMAN, Senate Committee on Federal Capital Territory, FCT, Senator Dino Melaye (APC, Kogi West), yesterday, asked President Muhammadu Buhari to apologise to the National Assembly for allegedly making what he described as disparaging statements against the integrity of the parliament.

The president had in a recent statement, said some lawmakers have been in the National Assembly for 10 years without doing anything. Dino Melaye Melaye, who came under Order 14, drew the attention of the Senate to what he described as “unparliamentary and uncomplimentary language” of President Buhari, and asked him to tender an unreserved apology.

Presenting video evidence before the Senate, Melaye said Buhari made the uncharitable statement when he met with members of his campaign organisation, led by Comptroller-General of Nigeria Customs, Col. Hameed Ali (retd), in Aso Rock Villa last week, pointing out that most appointees of government draw strength from the president’s disposition to behave rudely to the institution of the Senate.

Melaye also questioned why the Comptroller-General of Customs should be at the head of the campaign organisation of President Muhammadu Buhari, adding that the Nigeria Customs Service was a paramilitary organisation and that the position of Comptroller General was a rank  that should be separated from politics.

We should not rush to conclusion and in so doing, make contributions that may be of concern. We all agree that this institution is one that we must all protect at any given time. “The agencies that continue to participate in politics, we must call them to order because I believe we are not helping the institutions.

Those institutions know that they have a role to play and as such, they must not be seen to be doing things like that.”   Earlier in his presentation, Melaye said: “The president in the villa, while addressing a delegation of Buhari Campaign Organisation, was televised on Channels TV. 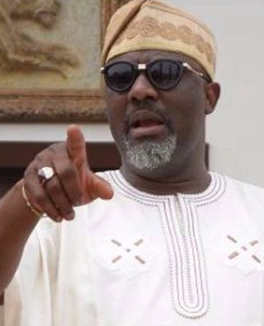 “One then begins to wonder why we should summon the IG and he refuses to come.  We are not surprised as to why directors-general of parastatals and heads of agencies will refuse to honour the summons of the National Assembly.

‘’The body language and the statement of the President is already demeaning the integrity of the National Assembly.  The occasion where the President made the statement was the visit of delegation of Buhari Campaign Organisation, led by the Comptroller-General of Customs.

It is an aberration, it is unconstitutional, it is undemocratic for a paramilitary organization headed by a comptroller general to lead a campaign organization to the President and they were welcomed. “Very soon, we will begin to see the IG attending the next APC convention of June 23, the Chief of Army staff shouting APC in some of the campaigns, we must as a Senate take a strong decision to protect our institution.

“We are creating great men when we are supposed to be creating great institutions. The statement of the President and the reason for allowing these people make this type of political affiliation, despite their offices, is reducing these institutions and our responsibility as a Senate is to protect these institutions and preserve them. “For the language and statement he made on the the National Assembly, President Muhammadu Buhari has signed my bill on jungle justice into law.

“In these ten years, we have passed budget, even the fight against corruption that is the cardinal objective of this administration, the EFCC and the ICPC are products of our labour in this National Assembly.  They were instituted as a result of our enactments.

“We must also an institution, take a decision on heads of parastatals, ministries and agencies of government getting involved in politics when by their calling, oath, they are not supposed to.”