The Defense Intelligence Agency believes that North Korean leader Kim Jong Un has no intention of engaging in a full denuclearization program, at least for now, according to an administration official familiar with the agency’s finding.

A second official tells CNN the Trump administration plans to present the North Koreans with a detailed list of tasks they must undertake to begin a denuclearization process.
The analysis is currently being circulated among other US intelligence agencies to see if they concur, the first official said. While the official would not detail the precise intelligence that has led to this conclusion, the agency utilizes satellite imagery, electronic intercepts and human intelligence gained from operatives.
A third official told CNN that the agency believes Kim may publicly agree to denuclearization to some extent, but that he will in reality hide weapons and infrastructure from the US.
The current view on Kim directly addresses his intentions rather than the overall capabilities of his weapons programs. If other elements of the US intelligence community agree with the Defense Intelligence Agency’s analysis, it could then become a so-called “finished intelligence product,” or report that would be briefed to the highest levels of the administration. It’s not known how much of the DIA finding the White House may be aware of.
Secretary of State Mike Pompeo will return to North Korea on July 5 to meet with Kim and his team, White House press secretary Sarah Sanders told reporters at Monday’s press briefing.
A foreign intelligence source told CNN that the intelligence community’s analytic judgment has stayed the same for years, which is that they are skeptical of Kim’s willingness to denuclearize.
This source said that they are unaware of any new projects the North Koreans may be working on, but reiterated that “they have given nothing up.”
Former UN weapons inspector David Albright told CNN on Monday that his firm has new information about a secret North Korean facility producing highly enriched, weapons-grade uranium. The information, Albright says, comes from Western intelligence sources.
“At Kangsong they’re using gas centrifuges,” Albright told CNN’s Brian Todd. Pointing to a photo, Albright identified the rotor assembly. “They’re producing weapons-grade uranium for nuclear weapons,” Albright said. “And the site may have up to 6,000 or more of these centrifuges.”
The Pentagon declined to address intelligence reports on North Korea’s nuclear capability when asked on Monday, saying only that the US military remains postured to “deal with any and all threats on the peninsula” with the goal of allowing “diplomats the space and the time to hopefully make progress coming out of the summit.”
Pentagon spokesman Col. Rob Manning also said that Trump’s decision to suspend joint military exercises with South Korea “will not impact the capabilities and readiness of our combined forces on the peninsula in order to deal with North Korea.”
The Defense Department has long been skeptical of North Korea moving quickly to denuclearize. Recent commercial satellite imagery has shown some continuing activity at various nuclear fuel and missile sites.
The Washington Post earlier reported on US intelligence officials’ doubt that North Korea intends to fully surrender its nuclear stockpile.
Kim “reaffirmed his firm and unwavering commitment to complete denuclearization of the Korean Peninsula” in a signed agreement after his Singapore summit with President Donald Trump. In the statement, Kim also said that his country would commit “to work toward complete denuclearization of the Korean Peninsula.”
But Trump has repeatedly mischaracterized the nature of his deal with Kim, insisting last month that the North Korean dictator had agreed to begin “total denuclearization” right away.
While Kim has consistently said he’s willing to denuclearize, long-time North Korea watchers worry that Pyongyang and Washington have very different definitions of the term denuclearization.
“Kim has never offered to disarm. Not once,” said Jeffrey Lewis, director for the East Asia Nonproliferation Program at the Middlebury Institute of International Studies at Monterey. “He’s arming, not disarming.”
White House national security adviser John Bolton would not comment on the Washington Post report Sunday, but did say on CBS News’ “Face the Nation” that North Korea’s nuclear arsenal could be dismantled in a year if Pyongyang cooperates, adding that the program would require “full disclosure of all (of North Korea’s) chemical and biological, nuclear programs, ballistic missile sites.” 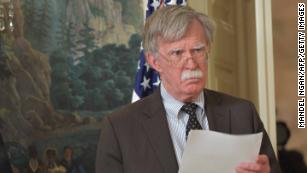 Bolton says there’s a one-year plan for North Korea to denuclearize, stays mum on WaPo report
“We have developed a program. I am sure that Secretary of State Mike Pompeo will be discussing this with the North Koreans in the near future about really how to dismantle all of their (weapons of mass destruction])and ballistic missile programs in a year,” Bolton said. “If they have the strategic decision already made to do that and they are cooperative, we can move very quickly. And it is to North Korea’s advantage to dismantle very quickly. Then the elimination of sanctions, aid by South Korea and Japan and others can all begin to flower.”
Bolton disclosed that the plan has not been put into action yet.
“It has not. Physically, we would be able to dismantle the overwhelming bulk of their programs within a year,” Bolton said.
Pompeo told CNN last week he would not put a timeline on negotiations with North Korea, but said the Trump administration will regularly assess the regime’s seriousness about abandoning its nuclear program as the US moves toward normalizing relations with Pyongyang.
He also played it coy when asked by lawmakers last week about specific conditions the administration has set for North Korea to achieve denuclearization and secure economic concessions.
“I’m not prepared to talk about the details of the discussions that are taking place,” he said, “I think it would be inappropriate and, frankly, counterproductive to achieving the end state that we’re hoping to achieve.”
A team of US officials led by envoy Sung Kim met with North Korean officials Sunday at Panmunjom, the border village between North and South Korea in the demilitarized zone, in the first face-to-face conversations between the two countries since the summit last month according senior State Department officials.
The foreign intelligence source who spoke to CNN said it would be worrisome if the administration does not have a timeline by September.
Bolton also said Sunday on CBS that during the US-North Korea summit in Singapore, Kim was “very emphatic several times” about turning over the arsenal, which was a change from previous regimes.
“Now, we’ll let their actions speak for themselves,” Bolton added.
“There’s nobody involved in this discussion with North Korea in the administration who is overburdened by naïveté. We’ve seen how the North Koreans have behaved before,” Bolton said.
“The President’s been very clear,” Bolton said. “He is not going to make mistakes of prior administrations. We are going to pursue this, and we will see what happens.”
However, one former member of the US National Security Council told CNN that the leak of this intelligence assessment could indicate there is internal frustration over the administration’s apparent trust in Kim’s sincerity moving forward.
“The (intelligence community) doesn’t assess that Kim Jong Un is acting in good faith … they’re probably fed up with the fact that (Trump) and Pompeo keep publicly touting their trust in one of the most definitively untrustworthy regimes the US has ever negotiated with,” the source said.
But the decision to leak this information also has a risk factor, according to the same source, who said the information could diminish the likelihood Kim will cooperate “if he thinks that, no matter what he does, the US has already prejudged him to be untrustworthy.”
Loading...
Post Views: 83
Continue Reading
80
Share FacebookTwitterGoogle+ReddItWhatsAppPinterestEmail