Sevilla qualified for the quarter-finals of the UEFA Champions League for the first time since 1958 after defeating Manchester United 2-1 in the round of 16 second leg tie at Old Trafford on Tuesday.

The first leg at the Sanchez Pizjuan three weeks ago ended 0-0.
Two second half goals in four minutes from substitute Wissan Ben Yeddar secured a berth in the next round for Sevilla, the former Europa League winners.
Manchester United were limited to just two attempts on target in the first half as Sevilla dominated the period of the encounter.
Marouane Felliani had United’s only real chance and that of the game in the 37th minute when his left footed strike at Sergio Rico was saved after he dispossessed Ever Banega at the edge of the box.
Jose Mourinho brought on Paul Pogba for Fellaini on the hour mark as his team searched for a goal.
Vincenzo Montella brought on Yeddar for Luis Murriel in the 72nd minute and two minutes later the French striker fired in a low drive from the edge of the box to give his side the lead.
He made it 2-0 with a header in the 78th minute. 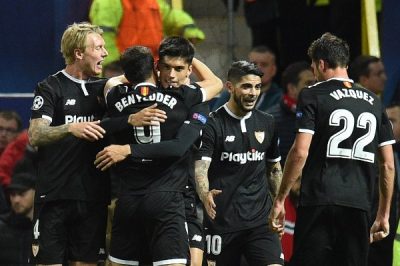 Romelu Lukaku came close to scoring a goal with a strike in the 79th minute but he missed.
The Belgian made up for his miss two minutes later, volleying in Marcus Rashford’s corner in the 83rd minute to make it 2-1.
Yeddar missed a chance to bag his hat-trick when he was played through on goal by Steven Nzonzi but David de Gea saved his goal-bound shot.
At the Olimpico stadium, AS Roma overturned a 2-1 deficit,beating Shaktar Donetsk 1-0 in the second leg to advance 2-2 on the away goals rule.
Edin Dzeko scored a second half goal in the 54th minute to seal a place in the quarter-finals.
The draw for the UEFA Champions League quarter-final will hold on Friday.
Loading...
Post Views: 351
Continue Reading
Sevilla wins
143
Share FacebookTwitterGoogle+ReddItWhatsAppPinterestEmail