Cossy Ojiakor and Uche Jombo The venue was filled with star-studded guest appearances which included Ufuoma McDermott, Jide Kosoko, Funnybone, Cossy Ojiakor and Francis Odega. Others were producer of the movie, Maryam Harris and the movie director, Charles Uwagbai, among other notable guests.

“The movie keeps its audience rolling in laughter cracking through the walls.  Charles Uwagbai did a superb job providing a very entertaining experience for the audience. This movie will have you laughing until the credits roll with relishing humor”, Uche Jombo remarked. 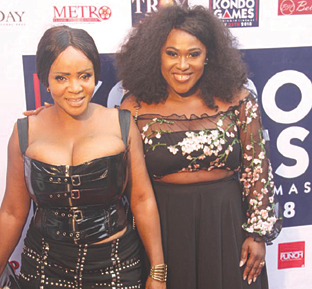 Portrayed by Francis Odega and Funnybone, the two police officers would later be faced with controversial tasks. With a sloppy boss, Jide Kosoko, to contend with, Austin and Vincent are locked in between crime busting and bursting a romantic fling with a voluptuous mistress, played by Cossy Ojiakor, who runs a beer parlor in the neighborhood. Cossy’s exploits heightens the rib-cracking comic adventure.