Singer Timaya shares photos of his mansion for the 1st time

Ok, guys, we have the official photos of the palatial mansion of the singer, Timaya as he shared the photos of the amazing building.

The singer took to his Instagram page on Thursday, April 19, 2018, where he shared photos of the gigantic mansion and well he said he misses home with his quote. “I miss HOME. @beyondarete Thank U!” he captioned the photo.

Who won’t miss home when you have a crib that looks like something close to what you can see in best highbrow areas in the world.

This is not the first time we will be getting to see photos of Timaya’s house but today the singer is sharing the photos by himself. Since the beginning of 2018, we’ve had a number of celebrities show us how they live flamboyantly by showing us their exquisite mansions. 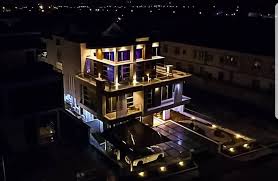 More photos from the new mansion

Recall when photos of the singer, D’banj’s crib showed up on the Internet. The musician took to his Instagram page on Monday, March 12, 2018, where he posted photos of his exquisite living room. In one of the photos, he captioned it with the quote “Have a kokocious week.”

We can also remember when former child star, Williams Uchemba announced that he had gotten himself a new crib in the united states Well, he didn’t just announce the big news but also released a couple of photos of the house.

Back in December 2017 when music star, Tiwa Savage announced that she gotten for herself a new house, she also released a photo of the beautiful crib for her fans.

Spice up your dressing with fascinators!

Cross-Dressing In Nigeria Proposed To Be Condemned By National Assembly