Davido has been listed among the performers at the 2018 Made in America festival holding at the Benjamin Franklin Parkway, US on the weekend of September 1-2, 2018.

Amidst a powerful line up that features some of the finest crop of established and budding talents that include Nicki Minaj, Post Malone and Meek Mill as headliners, alongside Diplo, Miguel, Fat Joe, 6Lack, Nigeria’s Davido will also be gracing the stage at the two days festivities. 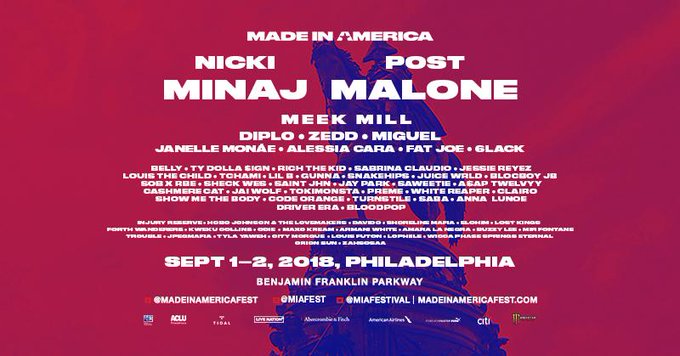 The lineup for #MadeInAmerica 2018 is here

It will be recalled that the 2017 edition of the festival had three Nigerian artistes, Wizkid, Tiwa Savage and Maleek Berry on its bill, even though the Star boy was unable to attend the event, it provided a platform for someone like Tiwa Savage ,who had an impressive set.

For Davido, this is another feather in his ever illustrious cap following his recent feats of performing before a crowd of 10,000 in suriname, South America and successful tours across the world.