EFCC HELD PDP CHIEFS TO SPEND A NIGHT IN JAIL –

A former Peoples Democratic Party (PDP) Governorship candidate in Edo, Mr Osagie Ize-Iyamu and the State chairman of the party, Chief Dan Orbih, spent Thursday night in Benin Prison, after failing to meet their bail conditions, as given by the Federal High Court.

The two spent the night at Benin Prisons alongside the other defendants, a former Deputy Governor of the state, Mr, Lucky Imasuen, a former member of the House of Representatives, Tony Azegbemi and Efe Anthony.

An officer of the Nigerian Prisons Service (NPS) who pleaded anonymity disclosed this to the News Agency of Nigeria (NAN) on Friday. The source who was on night duty at Benin Prisons on Thursday, said the five accused were kept in custody because they failed to meet with the bail conditions as at the time of close of work on Thursday. Ize-Iyamu and others were arraigned before a Federal High Court sitting in Benin on Thursday by the Economic and Financial Crimes Commission (EFCC), on eight count charge of laundering the sum of N700 million. 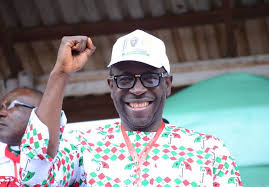 The  five accused were granted bail of N10 million each, with sureties of like sum. The Judge ordered that the sureties, who must not be below grade level 16, must be home owners, with Certificates of Occupancy (C of O) that should be deposited with the court’s deputy registrar. Justice P.I Adjokwu ordered that all the accused be remanded in custody pending when they meet their applications for bail.

The Judge gave the order after rejecting a plea by counsel to Ize-Iyamu, Mr Charles Edosomwan, that they should be kept in the custody of the EFCC. The case was subsequently adjourned till July 4, 2018. EFCC had arraigned the defendants on an eight-count charge of laundering the sum of N700million. The EFCC alleged that the defendants were arraigned for receiving N700 Million prior to the 2015 general elections from former Minister of Petroleum, Mrs Diezani Alison-Madueke.

Rapper, Olamide steps out with his fiancee and son (Photos)