Romelu Lukaku and N’Golo Kante have made it in to the WhoScored Champions League Team of the Week despite Manchester United and Chelsea crashing out of the competition this week.

United suffered a shock 2-1 second leg defeat to Sevilla at Old Trafford on Tuesday night to exit the Champions League at the last-16 stage following a 2-1 aggregate loss following the stalemate in Spain.

Wissam Ben Yedder’s quick-fire double midway through the second half did the damage and while Lukaku pulled one back late on, United couldn’t find the goals they needed to progress.

However, Lukaku still did enough to earn a place in the Champions League TOTW as the Belgian international secured a score of 8.00 which was enough to see him make the cut.

Lukaku joined Lionel Messi in attack after the Argentinean international’s superb performance saw him score two and set-up the other during Barcelona’s 3-0 win over Chelsea last night.

Messi’s 10/10 performance ensured he’s named as the WhoScored Player of the Week as Chelsea crashed out of the Champions League 4-1 on aggregate after being held to a 1-1 draw in the first leg.

However, midfielder Kante did enough at the Nou Camp last night to earn a score of 7.7 which was sees him named in the TOTW alongside the likes of Daniel De Rossi and Ousmane Dembele.

Check out the full Team of the Week here: 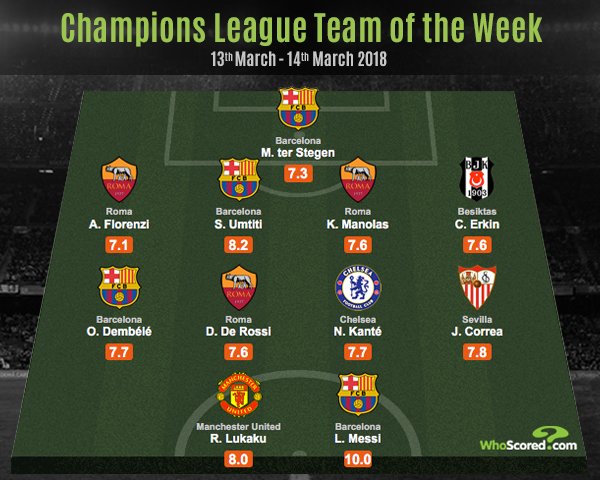 When you have the opportunity to make a great compliment to Messi, I think it’s right – Chelsea boss Antonio Conte