Instead of taking Igbo for granted, they should allow Igbo to go – Amechi

Instead of taking Igbo for granted, they should allow Igbo to go – Amechi

Awka – FIRST republic minister, Chief Mbazulike Amechi said yesterday that it was a pity that Nigerian presidency should be associated with ethnicity and religion. 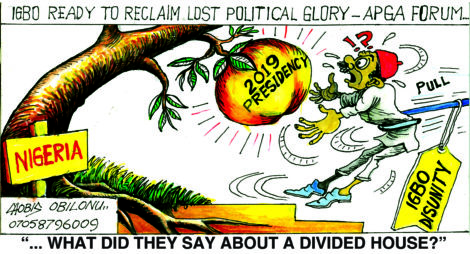 Reacting on the presidency’s statement during the South East rally of the ruling All Progressives Congress, APC, in Owerri, Imo State, that Igbo political future rests on President Muhammadu Buhari’s reelection, Amechi said the ideal thing in a civilized society should be that the best candidate should emerge from elections, but the situation in Nigeria is unfortunately different.

He observed that the North had produced most of the country’s presidents, yet they were insisting on producing the next one in 2019, adding that using it to entice Igbo people might actually not work.

While stating that President Buhari had the constitutional right to seek reelection, he said he, as an individual, would not want the president to occupy the position beyond 2019 in view of his age and health, as well as his alleged poor performance and the fact that he had proved to be a dictator.

He said: “I know they (Northerners) do not mean what they said concerning the Igbo presidency. Even though it looks certain that a northerner would become the next president, such a president should not take Igbo for granted as it is at present.

“Instead of taking Igbo for granted, they should allow Igbo to go, even though I do not support any breakaway. I love Nigeria and that was why I fought for her independence and even went to prison, although all that I did are not appreciated by successive Nigerian governments.”

According to him, Buhari’s performance in the last three years was filled with feudalistic tendencies, which only succeeded in breeding disharmony among Nigerians.

“He is the one behind the herdsmen menace in many parts of the country; otherwise he would have done something to stop the incessant killings. My belief is that the whole idea was to spread Islam,” he said.

He also said that the refusal of the Buhari administration to give Nigerians a new and workable constitution showed that he still had the military mentality, despite the fact that more than 80 percent of Nigerians wanted the country to be restructured.

Breaking:Tacha Slammed Buhari For “Addressing Nigerians On Twitter” Over…

Nigeria’s COVID-19 Cases Rise To 81, As Disease Spreads To Enugu

Breaking:Tacha Slammed Buhari For “Addressing Nigerians On Twitter” Over COVID19 –

Nigeria’s COVID-19 Cases Rise To 81, As Disease Spreads To Enugu

If Anybody Open his or her Mouth and say That Buhari Is Not Doing Well,That Person Is A Bloody Liar – Joe Igbokwe

I am Wondering why Mbaka did not see the Coronavirus hitting Aso Rock! – Jackson Ude

Nigeria’s COVID-19 Cases Rise To 81, As Disease Spreads To…

Hunger kills more than the coronavirus you are afraid of in…

PREPARING FOR CORONA VIRUS: IPOB MAP OUT 50 MILLION NAIRA TO…