Michael Cohen served loyally as Donald Trump’s right-hand man for more than a decade, taking care of anything and everything the New York real estate baron needed to get done.

On November 8, 2016, Cohen’s stock suddenly soared: He was now the personal attorney to the President-elect of the United States, with unique understanding of a man that everyone was scrambling to get access to.
Cohen quickly got to work. According to multiple people familiar with Cohen’s conduct following the election, he aggressively pitched himself to potential clients, reminding them of his proximity to the most powerful man in the world. Those efforts landed Cohen lucrative consulting deals. New reporting this week revealed that in the months following the 2016 election, Cohen received hundreds of thousands of dollars from powerful entities based in and outside of the United States.
“I don’t know who’s been representing you, but you should fire them all. I’m the guy you should hire. I’m closest to the President. I’m his personal lawyer,” was how one GOP strategist described Cohen’s sales pitch.
One company that Cohen immediately sought out was pharmaceutical giant Novartis. “He was shopping himself around,” a source familiar told CNN. Cohen would ultimately land a one-year contract with the firm by promising access to the White House on health care policy.
But that deal quickly soured. According to the source, company officials had one meeting with Cohen in March 2017 and decided that he would not be able to provide the access they desired. There would be no other meetings with Cohen, but Novartis chose to pay out the entirety of Cohen’s contract anyway — $100,000 per month, for a total of $1.2 million.

Money was flowing in from other companies, too. Telecommunications conglomerate AT&T publicly acknowledged this week that it hired Cohen for a simple reason: to gain “insights” into the new President and his administration. AT&T paid Cohen at least $200,000 in 2017, according to a source familiar with the matter.
AT&T is seeking government approval for its acquisition of Time Warner, CNN’s parent company.
Other payments to Cohen, according to a lawyer suing him, included approximately half-a-million dollars from a company linked to Viktor Vekselberg, a Russian oligarch with close ties to the Kremlin and $150,000 from Korea Aerospace Industries.
Cohen and his lawyer didn’t respond to a request for comment on this story. White House press secretary Sarah Sanders wouldn’t address the Cohen payments during a briefing with reporters Wednesday.
“As you know due to the complications of the different components of the investigation I would refer you to the outside counsel to address those questions,” she told reporters, later adding, “We are not engaging in matters in this process at all.”
She said she hasn’t heard “specific concerns” from the President on this topic.
While Cohen has not been accused of any wrongdoing, these new revelations raise serious questions about whether a man in Trump’s inner circle had engaged in influence peddling and could spell legal trouble for Cohen, who is already in hot water. He is currently under criminal investigation related to his business dealings, and federal officials raided his home, office and hotel room last month to seize thousands of pages of documents and records.
Another ominous sign for Cohen: lawyers working with special counsel Robert Mueller on the investigation into possible Russian collusion in the presidential election have questioned at least one company about its contract with Cohen.
“Novartis was contacted in November 2017 by lawyers from the special counsel’s office regarding the company’s agreement with Essential Consultants. Novartis cooperated fully with the special counsel’s office and provided all the information requested,” the company said. “Novartis considers this matter closed as to itself and is not aware of any outstanding questions regarding the agreement.”
If the revelations about the payments to Cohen are only just coming to light, others in Trump world say they are hardly surprised.
A former Trump campaign official who worked on the transition said “everybody knew” Cohen had taken on consulting work after the election. It was widespread practice among high-ranking Trump associates who did not go into the administration to provide consulting services after Trump won in November 2016, this person said, noting that Cohen was far from the only person to do so.
“You don’t need access to (Trump). All you need is the perception of access to (Trump),” the former campaign official said.

And Cohen wasn’t the only one who tried to capitalize on Trump’s victory.
Post-election, corporate America was on the hunt for anyone who could help them make inroads with the incoming administration. “There was a lot of scrambling,” said one Republican strategist. “C suites everywhere were freaking out.”
One person with ties to the campaign described being approached by a top tier tech company after the election with an offer: They would pay this person $50,000 a month to make introductions to members of Trump’s team. No lobbying necessary.
Another individual with deep ties to the Washington lobbying world put it this way: “Everyone said Trump won’t win. Everyone had all of these Hillary (Clinton) consultants lined up and realized when Trump won, they had nobody.”
Cohen happened to be one person who enjoyed genuine access to the President, one ex-campaign official said. During the transition, Cohen worked out of his office in Trump Tower in Manhattan, where his desk was a three-minute walk from the then-President-elect’s office on a nearby floor. Cohen and Trump spoke “multiple times a day” during the transition, this person estimated — it was during this period that the payments from major corporations first started to flow into Cohen’s Essential Consultants bank account.
Trump told reporters last month that Cohen was his lawyer. Cohen has also been seen recently at the President’s private club, Mar-a-Lago. Trump has also said that he didn’t know about the $130,000 payment that Cohen made using Essential Consultants to porn star Stormy Daniels, who alleges to have had an affair with Trump years ago. The White House has said Trump denies the affairs.
What’s less clear is how much Cohen discussed the nuts and bolts of policy-making with his longtime boss.
One source familiar with Cohen’s relationship with Trump said the President “never talked to Cohen about substantive matters” that Cohen’s clients would be interested in. 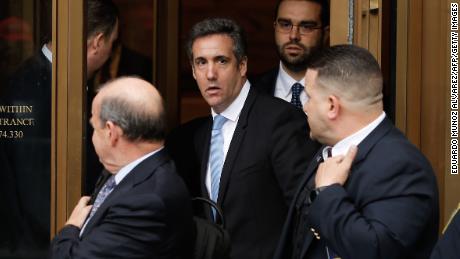 And the proximity that Cohen initially had to Trump during the transition greatly weakened after Inauguration Day, multiple people told CNN. Trump’s daughter and son-in-law, Ivanka Trump and Jared Kushner, sought to keep Cohen away from the White House, and he was rarely seen there. One person described Cohen as having become “disenfranchised” in the early months of the Trump administration — but that he nevertheless continued to portray himself as Trump’s go-to guy.
The fresh headlines this week about Cohen attempting to line his pockets after the election — and the perception that he was “harvesting money off of the President’s back” — could ultimately anger Trump, the source noted.
Robert Weissman, president of public watchdog group Public Citizen, said the precise nature of the work Cohen performed for each client would determine whether he violated any ethics laws.
Weissman cited the $200,000 in payments from AT&T to Cohen as an example of a transaction that would only violate laws if Cohen’s services went beyond what company representatives have said. AT&T has claimed the company only paid Cohen to gain “insights” into the President — and that there was no legal or lobbying work.
“As a legal matter, if they can stick to that story — that it was just for strategic advice — that’s probably permissible,” Weissman told CNN.
Meanwhile, the $400,000 that Cohen received from Novartis in installments from October 2017 to January 2018 preceded a dinner Trump reportedly had with a Novartis executive in Davos, Switzerland. Weissman suggested the timing of the dinner could raise red flags.
“This agreement was also in now way related to the group dinner Dr. Narasimhan had at the World Economic Forum in Davos with President Trump and 15 Europe based industry leaders,” Novartis said in a statement. “Suggestions to the contrary clearly misrepresent the facts and can only be intended to further personal or political agendas as to which Novartis should not be a part.”
Novartis has several prominent drugs pending approval from the Food and Drug Administration. Last year, the company secured some high-profile approvals from the FDA. While the drugmaker paid Cohen, it also spent millions of dollars to lobby lawmakers about more than a dozen pieces of legislation, including the Republican tax cut plan, according to federal disclosures.
What’s more, Cohen would need to register as a foreign agent if he provided any public policy representation to overseas companies, Weissman added.
Cohen accepted $150,000 from Korea Aerospace Industries, a South Korean company, in November 2017.
In partnership with US defense giant Lockheed Martin, the company is currently vying for a lucrative contract with the United States Air Force, which plans to buy approximately 350 new training jets. The Air Force is considering buying the T-50 Golden Eagle, which is developed by Korean Aerospace Industries. A decision is reportedly expected this spring.
The company told CNN that it retained Cohen to receive “short term legal advice.”
“Korea Aerospace Industries, LTD. received legal advice on the Cost Accounting Standards regulation from Essential Consultants, LLC through a contracted deal,” a spokesperson said. “The payment was all legal based on the contract. KAI is doing its best to comply with accounting regulations that are up to global standards.”
The spokesperson clarified that the company did not have direct contact with Cohen at the time, and that the “deal was done by someone else.” It was not immediately clear who this “someone else” was.
Loading...
Post Views: 410
Continue Reading
Donald TrumpMichael Cohen
192
Share FacebookTwitterGoogle+ReddItWhatsAppPinterestEmail

‘I will be 34 next month, but i haven’t found true love’ – Paddy Adenuga cries out

Make pounded yam with a blender with these easy steps