My Temper Landed Me In Kirikiri Prison – Ex Prisoner

Jide Odusanya, a former inmate of the Kirikiri Maximum Prison, while narrating the experience that lead him to the prison, advised people to control their tempers which could land them in prison.

Jide who is an indigene of Sagamu in Ogun State, spent 26 years in three different prisons in the country before he was pardoned by the Lagos State Government, revealed that a fight over water spillage destroyed his dream of becoming a bank manager.

He made this disclosure while speaking at a conference organised by the Prison and Hospital Ministry of the Redeemed Christian Church of God at the Ogun Province 4 Headquarters, Redemption Camp, Ogun State on Tuesday.

Odusanya had testified along with two others at the event, tagged, ‘From Hopelessness to Glory,’ saying he was sentenced to death for a crime he did not commit.

The 57-year-old, who is unmarried, said his ordeal started in June 1991 when he fought a mechanic in the Ebute-Meta area of Lagos State where he lived with his parents.

He said, “The mechanic usually came to fetch water in my father’s house and I told him to always lock the tap when he was done. This was because my room’s window was close to the tap and when water spilled on the floor, it bred mosquitoes which entered my room.

“But that day, he asked why I would talk to him in such a manner. He pushed me. I was angry and slapped him, which started a fight. The younger brother of one of my friends came to visit me that period. 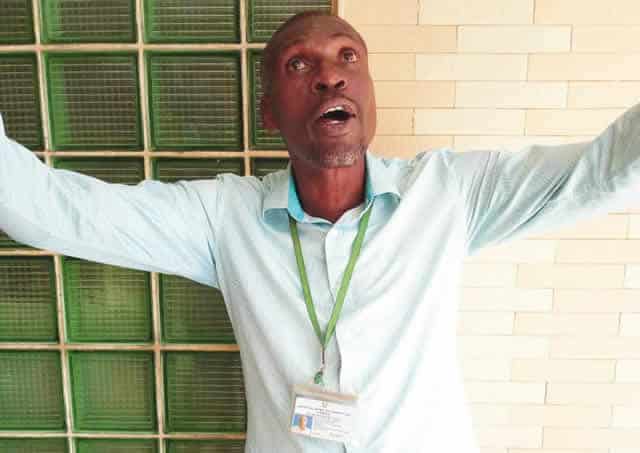 “Instead of separating the fight, the boy took a flaming wood and smashed it on the mechanic’s head. The mechanic hit his head on the ground and sustained some injuries. The boy and I were arrested and detained at the Iponri Police Station for causing grievous bodily harm.

“The injured mechanic’s uncle, who was an army officer, said he was interested in the case. It was during the military regime. We were transferred to the State Criminal Investigation and Intelligence Department, Yaba.”

Odusanya said at the SCIID, the police changed the case to armed robbery after the Investigating Police Officer visited his house and found a knife which he used to cut loaves of bread.

He noted that he and the co-accused were arraigned for armed robbery in a magistrate court and were remanded in the Ikoyi Prison, where they spent seven years without trial.

“After seven years, legal advice said I had a case to answer, while the boy was discharged and acquitted. I was moved from the Ikoyi Prison to the Kirikiri Maximum Prison.

“I was taken to a court at Igbosere where I was sentenced to death based on the knife evidence. I was on death row for three years before former Lagos Governor, Bola Tinubu, converted it to life imprisonment on December 31, 2001.

“I spent 16 years in life imprisonment. At some points, I was taken to the Ibara Prison in Ogun State and would have been released by the then Governor of the state, Gbenga Daniel, who asked to see my file. But the prison authorities did not send the file to him.

“After eight years at Ibara Prison, I was returned to the Kirikiri Prison. I was considered for pardon by the Lagos State Government and was released in June 2017,” he added.

Odusanya said upon his release, he met his nurse girlfriend, whom he was engaged to before the incident, adding that she was already married with five children.

He noted that his father and mother died while he was in prison.

He said during counselling, some church workers assisted him to connect with a relative who worked with the Nigerian Railway Corporation, adding that the relative thought he (Odusanya) was dead.

The ex-convict lamented the condition of Nigerian prisons, saying many inmates became hardened after going through the system.

“The prisons are not reforming anybody. Those who make the difference in our prisons are the non-governmental organisations and churches. Anybody that comes out of prison and changes, God must have been involved. Most often, criminals become hardened after passing through the prison.

“I became a born-again Christian in prison due to the visitations of some churches like the Mountain of Fire and Miracle Ministries, led by Dr D.K. Olukoya; Pastor Tunde Bakare’s Latter Rain Assembly and the Redeemed Christian Church of God. Pastor E.A. Adeboye’s visits to prisons every two years and his ministrations give people like us hope.

“I made my O’level credits in prison and gained admission into the National Open University of Nigeria where I started studying Cooperative Management. I am now in 200 level. The challenge I have is that after I was released from prison, the school withdrew a scholarship it gave me. I have been running around to raise the school fees of N50,500 to no avail,” he added.

Odusanya took time to advise Nigerians to keep away from arguments that could lead to them misbehaving, adding that some powers could be behind the action.

Asked his plans about marriage, he said he was not bothered because he believed God had plans for everyone.

Pastor Ariyo Popoola, the Chairman of the RCCG Prison and Hospital Ministry, appealed to the government to provide conducive environment for the youths to thrive and increase employment opportunities to reduce crime in the country.

The Lagos State Commissioner of Police,Edgal Imohimi, who was represented at the event by the state Police Public Relations Officer, SP Chike Oti, in a presentation, asked Nigerians to always be security conscious and avoid giving out too much personal information on the social media.

How to deal with excessive sweating

5 early warning signs of diabetes you should not ignore

Two Nigerians Are Detained In Pakistan’s Islamabad Airport For Trafficking…

Farm workers in Kwara are accused of murdering the owner.