Google on Thursday changed its logo to celebrate Georges Méliès’ most outstanding work, A Trip to the Moon, which was released 116 years ago, precisely on May 3rd, 1902.

Google commemorated the anniversary of Melies’ first silent film with another first of its own. It changed its logo to its first VR and 360-degree interactive Doodle

Georges Méliès is a French illusionist and stage magician before he became a film director.

Méliès is described as “the father of special effects” and hailed for his pioneering visual techniques.

He started his earliest days in belle epoque Paris, an extraordinary visual stylist and technician who is still much admired a century on, reports Aljazeera.

Méliès is best known for the unforgettable image of a scowling celestial body annoyed that a rocket ship has crashed into its eye in A Trip to the Moon (1902).

See the doodle below: 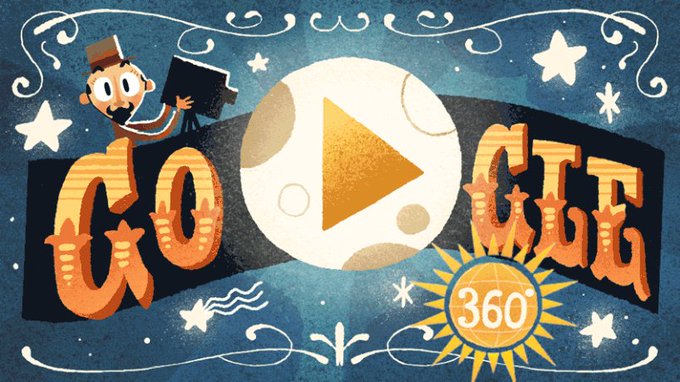 Méliès was born in 1861, the son of luxury shoemakers who, after attending the prestigious Lycee Louis-le-Grand, completing military service and serving an apprenticeship as a clerk in London, shunned the family business to work as a conjurer at the Theatre Robert-Houdin in Paris.

Here, Méliès developed a fondness for stagecraft and visual effects, working with mechanical automata, trapdoors and lighting, eventually selling his boot factory shares to his brothers and buying the theatre outright.

After seeing the Lumiere Brothers sensational moving picture camera in action in 1895, Méliès rushed out to establish his own studio and began making films that featured clever illusions and tricks created by experimenting with double exposure, cutting and rewinding, building on his theatrical innovations.

Buhari Yet To arrive Nigeria, As His whereabout is declared Unknown