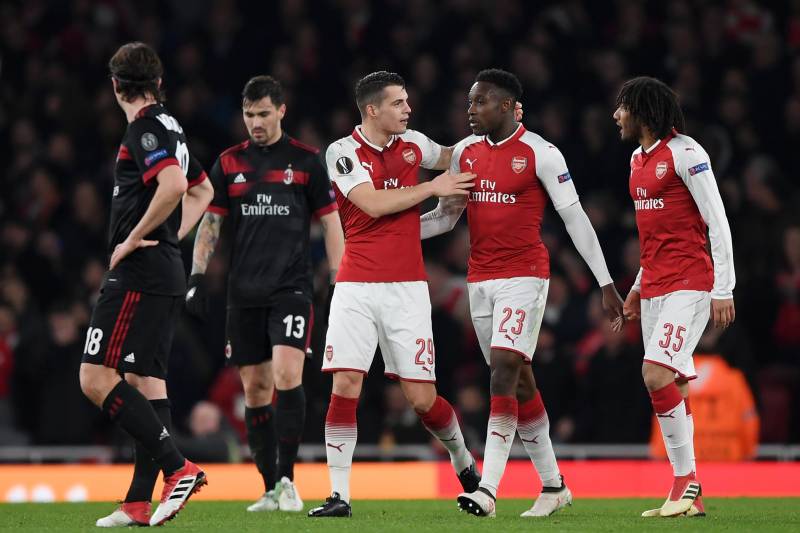 Danny Welbeck scored twice for Arsenal on Thursday as they secured their place in the UEFA Europa League quarter-finals by beating AC Milan3-1 at the Emirates Stadium to complete a 5-1 aggregate win.

The visitors took the lead on the night through Hakan Calhanoglu, but Arsenal levelled swiftly through a controversial Welbeck penalty. Granit Xhaka then restored their two-goal lead before the former Manchester United man grabbed his second late on. 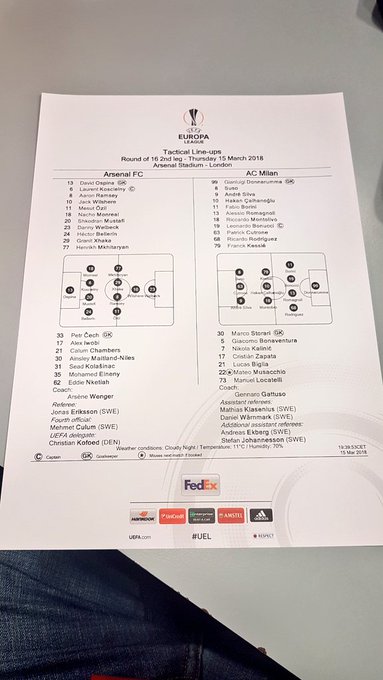 Seven changes for Arsenal from Sunday’s win against Watford. Monreal, Bellerin, Ramsey and Koscielny return after being left out. #AFCACM
The first half was an entertaining affair with both teams happy to attack. Milan went for it right from the kick-off with Andre Silva firing a shot into the side-netting with less than a minute on the clock.

Arsenal also suffered a blow early on as captain Laurent Koscielny was forced off with what looked like a back injury. James Olley at the Evening Standard offered an insight into the defender’s current problems

Hope for Koscielny’s sake that is a back problem he appeared to suffer in challenging for a corner rather than his Achilles. He’s having daily treatment on his Achilles as it is – aggravating that could easily be much worse.

Milan took the lead on 35 minutes when Calhanoglu was allowed too much time and space and fired a shot from range which dipped and curled past goalkeeper David Ospina.

Arsenal responded well to going behind as they went straight back on the attack. Aaron Ramsey forced Gianluigi Donnarumma into a smart save before Welbeck won a controversial penalty.

The England international went down in the box under the faintest contact from Ricardo Rodriguez in the 39th minute. Goal’s Carlo Garganese did not mince his words about the decision:

Milan were furious about the penalty being awarded, but Welbeck kept his nerve to send Donnarumma the wrong way and level the match on the night.

The second half began in similar style with Ramsey and Henrikh Mkhitaryan both going close for Arsenal and Silva crossing for Patrick Cutrone to volley wide.

The excitement was proving too much for Milan head coach Gennaro Gattuso, who had to be restrained on the touchline, per The Independent’s Miguel Delaney

The visitors ought to have gone ahead when Leonardo Bonucci set up Nikola Kalinic with a fine cross, but the substitute could only head tamely at Ospina.

Arsenal then made the game safe with 19 minutes of normal time remaining. Xhaka had a shot from range which Donnarumma made a mess of and could not keep out. It was a poor mistake by the Milan goalkeeper, according to Olley:

With victory assured, the mood around the Emirates Stadium lifted with both sets of fans in fine voice, as shown by Simon Collings of Hayters:

Arsenal continued to go forward and added a third late on. Jack Wilshere drifted into the box and lifted a cross for Ramsey at the back post. Donnarumma managed to save the Welshman’s effort, but the ball fell to Welbeck and he nodded home from close range in the 84th minute.

The victory is another boost for Arsenal as they bid to end the season by claiming glory in the Europa League. Along with Atletico Madrid, they will be favourites to lift the trophy; and after seeing off Milan comfortably, they will fear few teams in Friday’s quarter-final draw.