The Oyo State Government has shut Bodija market, Ibadan, as police and butchers clash on Thursday.

According to the verified twitter handle of the Oyo State government, @oyostategovt, the market was shut after gunshots were heard in the market.

News Flash:
The Oyo State Government has shut down Bodija market for security reasons. This is an aftermath of the sporadic shooting which occurred earlier today in the market and its environs. /1 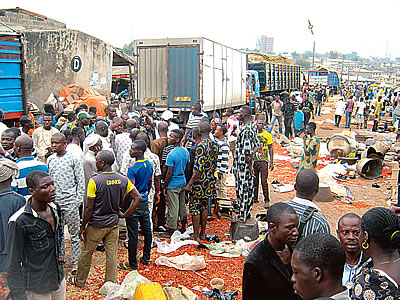 The state government had directed that the butchers should relocate to a new abattoir outside the town but the butchers did not agree with the directive.

On Tuesday, the butchers staged a protest at the state secretariat in Ibadan over the demolition of the abattoir in the market by the government over the weekend.

Our correspondent learnt that Thursday’s clash began when some of the butchers accused their leaders of taking gratification from the government to support the relocation order.

The clash led to the closure of shops in the market while traders vacated the market because of the commotion.

When contacted, Public Relations Officer of the Oyo State Police Command, Adekunle Ajisebutu, said he would come up with a statement on the clash soon.

Error: Error validating access token: The session has been invalidated because the user changed their password or Facebook has changed the session for security reasons.
Type: OAuthException
Code: 190
Subcode: 460
Please refer to our Error Message Reference.

(adsbygoogle = window.adsbygoogle || ).push({}); The Federal Government has said there is no...

Serena Williams made 56 unforced errors against Wang Qiang, who only had 202020 Australian OpenVenue: Melbourne Park Dates: 20 January to 2 FebruaryCoverage: Listen on BBC Radio 5 Live Sports Extra and online; Live text on selected matches on the BBC Sport website and app.Seven-time champion Serena Williams has been knocked out of the Australian…

Rory McIlroy one back after round one at Torrey Pines

Sam Kerr: Australian superstar was ‘nervous’ ahead of WSL debut

Media playback is not supported on this device Chelsea was the best fit for me - Sam KerrShe may be one of the best strikers in the world, but even Sam Kerr admits she felt nervous about playing in the Women's Super League.Chelsea beat off competition from the likes of Bayern Munich and Real Madrid…

TheBiafraStar is your news, entertainment, music & fashion website. We provide you with the latest news and videos straight from the entertainment industry.
Contact us: info@thisdaynews.net