Real Madrid are leaving no one behind for their Champions League trip to Bayern Munich, as Zinedine Zidane named a 24-man squad.

Zinedine Zidane has named a full 24-man squad to take to Germany for Wednesday’s Champions League semi-final first leg at Bayern Munich, with Nacho Fernandez back from a hamstring injury.

Madrid travel to the Allianz Arena in underwhelming form having won just one of their last four matches across all competitions – a 2-1 victory over rock-bottom Malaga in LaLiga.

But Zidane’s men have a tremendous record in the Champions League in recent years, having lifted the trophy in each of the last two seasons while the Frenchman was assistant to Carlo Ancelotti for the club’s triumph over neighbours Atletico Madrid in 2014.

They met Bayern in the quarter-finals last term and ultimately progressed 6-3 on aggregate, though they needed extra-time in the second leg to secure their passage. 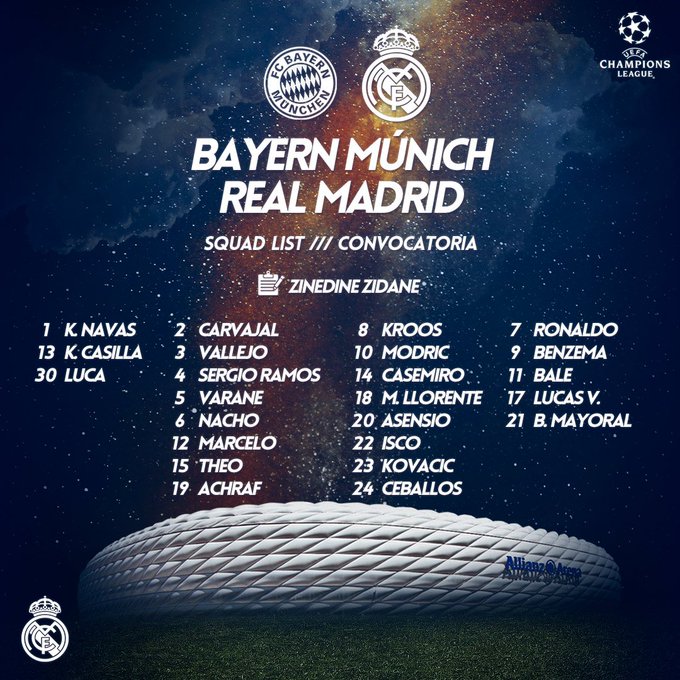 Zidane will not be able to use injuries as an excuse if his side return to Madrid with an unsatisfactory result, as the Frenchman has a full selection available to him.

And he has opted to take his entire first-team squad with him to Bavaria, with Nacho – who suffered a hamstring strain on March 31 against Las Palmas – back in the frame once again.

Breaking News: 5 La Liga records that neither Messi or Ronaldo will ever break

Breaking News: 5 mistakes made by Jose Mourinho this season