Jack Wilshere is yet to extend his Arsenal contract but Arsene Wenger is confident they will be able to keep the midfielder.

Arsene Wenger is confident Arsenal will be able to tie down Jack Wilshere to a new “long-term” contract.

The midfielder is yet to agree to an extension to his deal, which expires at the end of this season, and has been linked with the likes of Liverpool, Everton, Manchester City and Wolves.

Wenger admits he is unsure about Wilshere’s intentions but he hopes he will agree to the new offer before England begin their World Cup preparations.

“I cannot give you any news because I don’t know what’s really in his mind,” the Gunners boss told a news conference. “He has not signed, he has an offer, we want him to stay.

“He has an offer on a long-term contract. I hope, at some stage, he’ll sign it. I am always confident. You want the players to stay and be paid well and I think everyone would agree we pay our players well.

“He has the freedom to make that decision. He knows that I want him to stay. I think he will make the decision before the end of the season. He will not want to go to the World Cup and not have settled his situation.” 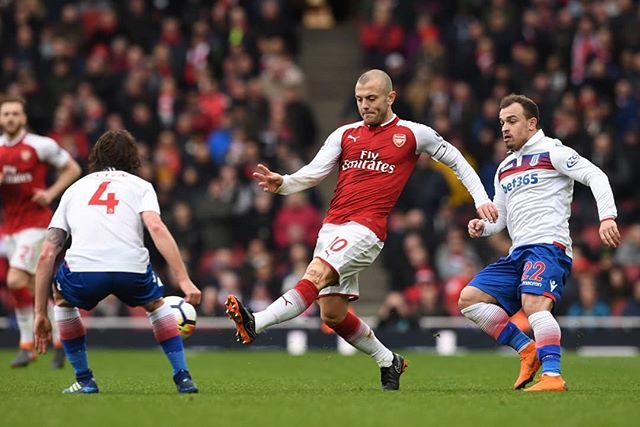 Nice to be back at home. Not our best performance of the season but we stuck at it and got the 3 points. Thanks for the support gooners #AFC

Wenger also believes Santi Cazorla could earn a contract extension if he can prove his fitness when he returns from injury.

The midfielder has not played in the Premier League since October 2016 due to complications following an operation on an ankle tendon and Wenger admits he faces a battle to prove he can cope with the Premier League when he returns.

“I haven’t seen Santi since the EFL Cup final because he’s gone back for his rehab,” said Wenger. “The last news I heard is that he was doing very well. Can he play again in the Premier League? I don’t know.

“Yes, of course [he could get new deal]. We miss him a lot. I never spoke about it in press conferences but we missed him a lot. He’s an exceptional football player. It’s very sad what happened to him and very sad for Arsenal.

Asked if Cazorla can still cope with the top flight’s intensity, he added: “To be completely honest, I don’t know. I hope so, but I don’t know.”