BREAKING NEWS: We did it against Messi and Suarez – Nainggolan plots Liverpool downfall

Liverpool take a 5-2 lead into their Champions League clash with Roma, but Radja Nainggolan pointed out that the Italians stunned Barcelona.

Roma star Radja Nainggolan is taking optimism from the fact his side managed to eliminate Lionel Messi and Luis Suarez as they look to overturn a three-goal deficit against Liverpool in the Champions League.

Liverpool blitzed Roma in the first leg at Anfield last week and appeared to be easing into the final after going 5-0 up.

Roma gave themselves a glimmer of hope by scoring two late goals, however, meaning a 3-0 win in Rome on Wednesday will be enough to send them through to the final.

While a 3-0 Roma victory is by no means a given, they can at least take encouragement from beating Barcelona by the same scoreline at home in the quarter-final second leg, securing qualification despite losing 4-1 at Camp Nou.

“We did it against Barcelona – against [Lionel] Messi and [Luis] Suarez – and they barely had a shot all game,” Nainggolan told the Times. 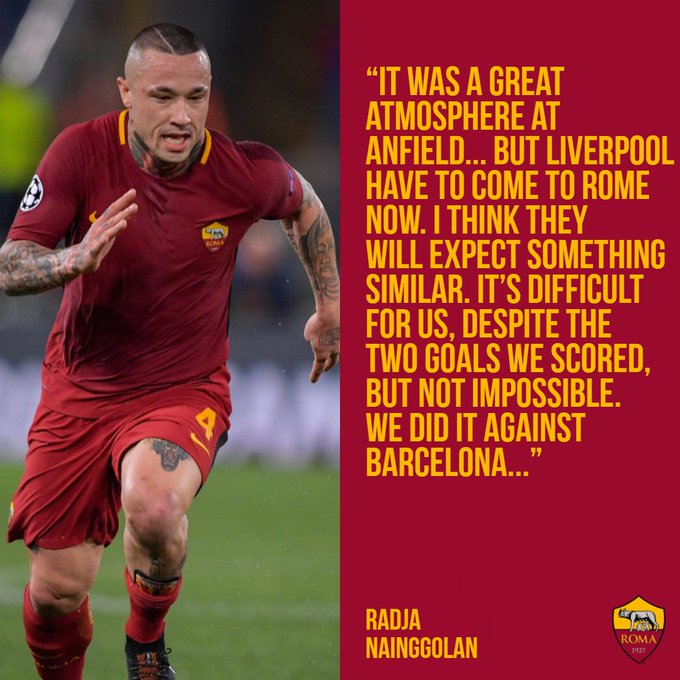 “We’ll try to make another historic moment like we did against Barcelona. That shows that it’s possible.

“We were sad in the locker-room after the game at Liverpool, but the coach said to us the next day: ‘We have to believe we can do it.’ That’s all we can do.

“It was difficult for us. It was the first Champions League semi-final for a lot of our players and to lose 5-2…They are so quick in the attack and we had a lot of difficulties.

“It’s difficult playing against them because they’re all aggressive, they all press high and they keep running like animals.

“Even in the 94th minute they were still running. I don’t think Liverpool had what I would call fluid actions, but they were playing the ball into space and we made too many mistakes by leaving for them.

BREAKING!!! SEE What Benue Did to Herdsmen After Trump’s Speech