Breaking News: US Navy’s most expensive warship just got even pricier

Using magnets rather than ropes or cables, the Ford’s special elevators are used to transport bombs up to the flight deck so they can be loaded onto aircraft. Designed to carry significantly more weight than previous elevators, they are intended to streamline the process of loading and reloading aircraft — getting them on and off the ship at a faster rate.
“The Navy intends to use the authority granted by Congress in the 2007 (National Defense Authorization Act) to increase the cost cap in order to correct deficiencies identified during testing as well as those changes required to ensure the safety of the ship and personnel,” the Navy said.
“Once the adjustment is executed, the cost for (the Ford) will stand at $13.027 billion,” the service told CNN.
The cost increase was first reported by Bloomberg last week.
While the Navy has the authority to adjust certain costs if “required to complete post-delivery test and trials,” the service must inform lawmakers when a spending cap breach occurs and outline how it will shift funds to cover the difference. 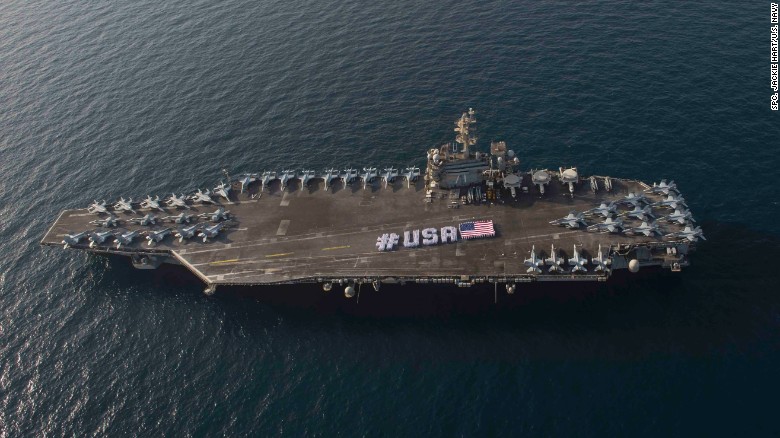 PHOTOS: US aircraft carriers
Sailors spell out #USA with the American flag on the flight deck of the Nimitz-class aircraft carrier USS Theodore Roosevelt in the Persian Gulf in late June 2015. When the Roosevelt leaves the Gulf sometime in October, the U.S. Navy will be without a carrier in the important region for two months.
The first of three similar carriers ordered by the Navy, which will be known as Ford-class carriers and whose combined cost is expected be close to $42 billion, the Ford’s innovative features have been touted as one of its biggest assets, but testing those unproven systems has, at times, yielded growing pains.
Early testing of the carrier’s plane-launching electromagnetic catapult failed in 2015, which was just one of several setbacks for a program that has been criticized by some lawmakers for a series of schedule delays and cost overruns.
While the latest cost increase is unrelated to previous issues with the Ford’s catapult system, the news is yet another reminder of the program’s checkered past as the ship enters its final trial and testing stages before it is scheduled to be deemed ready for deployment in 2022.
A January 2018 report from the Pentagon’s Operational Test and Evaluation Office found that the 100,000-ton warship was plagued with troubles in critical systems, including its catapults that launch planes, the arresting gear which catches them upon landing, and its radar.
Those deficiencies “make the ship more vulnerable to attack, or create limitations during routine operations,” the report said.
Other problems are more mundane, but show just how many issues have to be ironed out with a new warship, such as the test office report saying the Ford is expected to be short of spaces for its crew to sleep.
Despite delays to the Ford’s delivery, the Navy told CNN in July that the Ford-class carriers will yield a $4 billion reduction per ship cost as compared to the preceding Nimitz-class ships.
The carrier will undergo one more “at-sea period” for previously planned testing before entering what the Navy calls the “post-shakedown maintenance availability” in mid-July to “install remaining combat systems, complete deferred work and correct any remaining
discrepancies.” 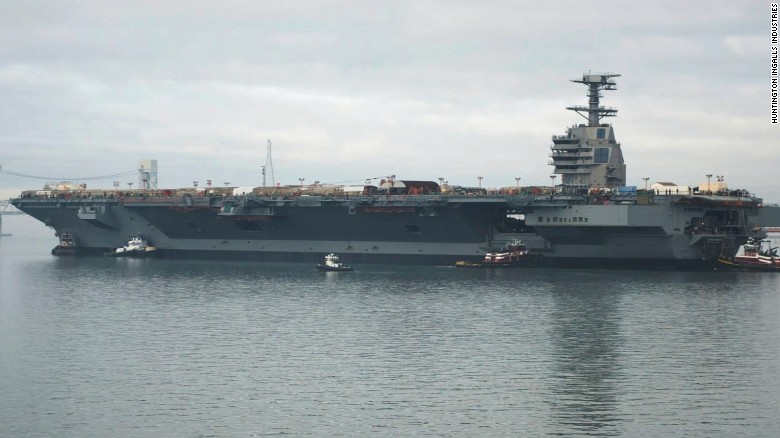 U.S. Navy’s new $13B aircraft carrier can’t fight
Prior to its first deployment, the Ford will also “conduct full-ship shock trials,” the Navy told CNN on Monday, a process that involves intentionally detonating explosive charges in the water near the warship.
The Ford “will conduct further trials and testing, and prior to its first deployment conduct full-ship shock trials. The ship will work up for deployment in parallel with its initial operational testing and evaluation,” according to Naval Sea Systems Command.
In 2016, the Navy set off three 10,000-pound charges near its new littoral combat ship, the USS Jackson, to test its ability to withstand the effects of a nearby underwater explosion.
As the first new carrier design in 40 years, it was unclear whether the 1,100-foot Ford would go through shock trials as the Navy does not always test the first ship in a class given the test can at times result in further delays and additional cost increases.
But foreign rivals — especially China — have focused on developing weapons specifically engineered toward targeting American aircraft carriers.
And given the Ford’s immense price tag, experts argue that the ship must show it can withstand an enemy attack before it is deployed to a combat zone.
Warrior Maven was first to report that the Ford would undergo shock trials.
Despite the challenges that come with developing and testing a carrier that is first in its class, commanding officers touted the expertise demonstrated by the Ford’s crew members in operating its advanced systems when CNN visited the ship last July.
“These sailors onboard are experts in the equipment … they are the ones who are testing and evaluating it for the future of Ford-class carriers,” said Command Master Chief Laura Nunley, the highest-ranking enlisted sailor on the carrier. “That alone brings a huge sense of ownership and I couldn’t be any prouder of the crew.”
The Navy has operated 10 carriers since the retirement of the USS Enterprise in 2012, one fewer than the 11 carrier-force mandated by Congress in 2011. The Navy was granted a waiver as it waited for the Ford to be completed.
PHOTOS: The “island” aboard the USS Gerald Ford. 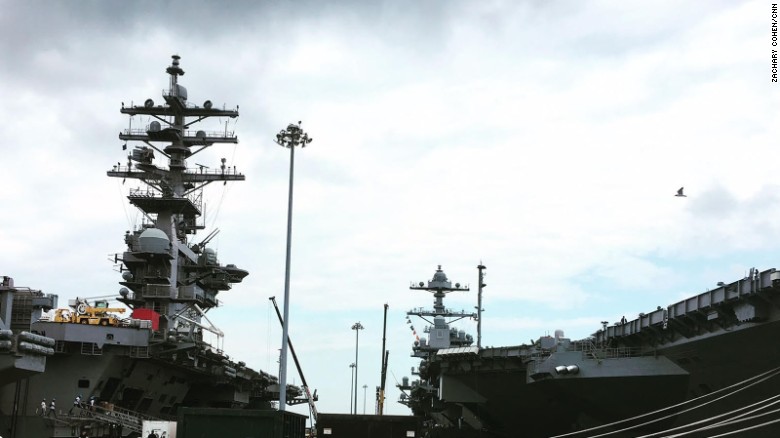 PHOTOS: The USS Gerald Ford docked at Naval Station Norfolk next to the USS Dwight D. Eisenhower.
Many of the crew members have been with the carrier since the earliest stages of development, supplementing a lack of experience out at sea with a deep breadth of knowledge about the new technology that is expected to set the standard for the future of the Ford-class.
The next carrier in the Ford class, the USS John F. Kennedy, is scheduled to launch in 2020 and the third Ford-class carrier, the new USS Enterprise, is set to begin construction this year.
Loading...
Post Views: 485
Continue Reading
pricierUS Navy's
241
Share FacebookTwitterGoogle+ReddItWhatsAppPinterestEmail