US president says meeting ‘inappropriate’ after ‘tremendous anger’ displayed by Kim
President Donald Trump has cancelled a summit with North Korean leader Kim Jong Un because of the “tremendous anger and open hostility” from Pyongyang in recent weeks.
In a letter to Mr Kim, the US president wrote that it would be “inappropriate, at this time to have this long-planned meeting.”
The White House released the letter hours after North Korea said it had destroyed its nuclear test site in a move that was designed to show its sincerity about pledges to denuclearise.
The destruction of the Punggye-ri facility, the country’s only known test site, had divided opinion, with many analysts viewing the move as more of a symbolic gesture by Pyongyang than a genuine step towards abandoning nuclear weapons.
Mr Trump had been due to meet Mr Kim in Singapore on June 12 but relations between the two countries had soured in recent weeks.

Earlier on Thursday, a top North Korean official ramped up the rhetoric by hitting out at US officials, in particular vice-president Mike Pence, for their “stupid and ignorant” remarks about North Korea.“Whether the US will meet us at a meeting room or encounter us at nuclear-to-nuclear showdown is entirely dependent upon the decision and behaviour of the US,” said Choe Son Hui, a North Korean vice-foreign minister.

Mr Trump used the letter to remind Pyongyang of the size of the US nuclear arsenal. “The Singapore summit, for the good of both parties, but to the detriment of the world, will not take place,” Mr Trump wrote, he continued: “You talk about nuclear capabilities, but ours are so massive and powerful that I pray to God they will never have to be used.”
US stocks extended their losses after the announcement with the S&P 500 and Dow falling 0.6 per cent. Yield on the benchmark 10-year Treasury note, which moves inversely to the price, was down 3.5 basis points at 2.968 per cent. 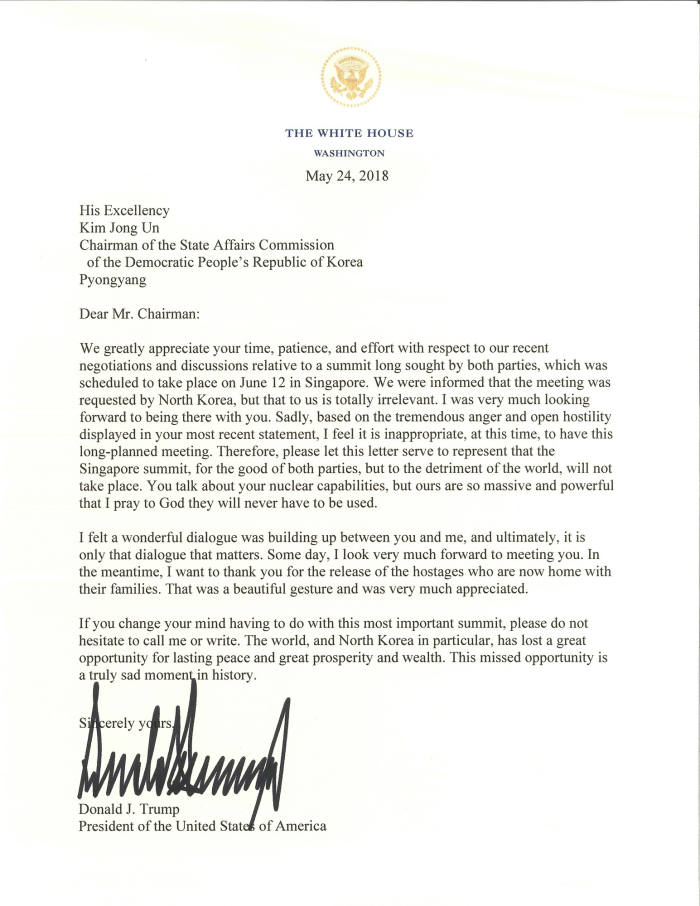 Breaking News: Trump told confidant he wanted to brand FBI informant a ‘spy’ because he thought it would resonate with media, public: report