Lighting up the deep overnight sky, a SpaceX Falcon 9 rocket flashed to life and blasted off from Cape Canaveral early Monday, boosting a powerful SES satellite into space that will deliver direct-to-home TV, broadband and data relay services to customers across the Asia-Pacific region, Australia and the Middle East.

Racing away to the east, the booster put on a brilliant light show as it powered out of the dense lower atmosphere, smoothly accelerating as it consumed its load of liquid oxygen and kerosene rocket fuel. It was the 56th launch of a Falcon 9 rocket, SpaceX’s 11th flight so far this year and the company’s fifth launch for SES. 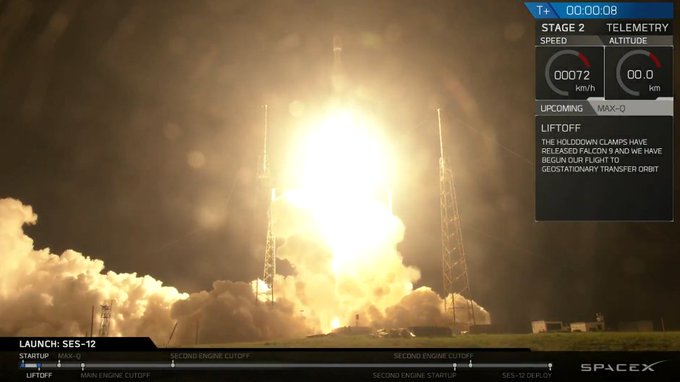 As planned, the nine Merlin 1D engines at the base of the first stage shut down two minutes and 45 seconds after liftoff, burning through virtually all of the booster’s propellants. The spent stage then fell away and the single engine powering the second stage took over to continue the trip to space.

SpaceX made no attempt to recover the earlier-generation “block 4” first stage, which was limited to only two flights. Instead, the stage simply fell back into the lower atmosphere for a crash landing in the ocean. SpaceX is in the process of transitioning to upgraded block 5 boosters that are designed to make 50 to 60 flights before retirement.

Without having to reserve propellants for a landing attempt, along with use of an upgraded block 5 second stage, the Falcon 9 was expected to boost the 11,800-pound SES-12 satellite into a “super-synchronous” transfer orbit, an ellipse with a high point of around 36,000 miles and a predicted low point of 182 miles.

© SpaceX 060318-spacex.jpgThe satellite’s lightweight ion propulsion system will slowly but efficiently boost the relay station into a circular orbit 22,300 miles above the equator. At that altitude and equatorial orientation, satellites take 24 hours to complete one orbit and thus appear stationary in the sky despite Earth’s rotation.

Because it takes less on-board xenon propellant to achieve the required equatorial orbit, the Falcon 9, by boosting SES-12 into a high super-synchronous transfer orbit, will add more than five years to the satellite’s lifetime and shave nearly a month off the time needed to reach its operational location.

“We get a lot of performance from this vehicle,” Martin Halliwell, chief technical officer of SES, said of the Falcon 9. “We’re going really high. We’re almost going to the limit of what we can do with the spacecraft. The good side of all this is it actually extends our (on orbit) life capability from 15 to 22 years. That’s enormous.”

SES-12 eventually will be positioned at 95 degrees east longitude, co-located with the SES-8 relay station — the first SES satellite launched by SpaceX. After extensive tests and checkout, SES-12 should enter operational service early next year.

“This is an incredibly flexible satellite that we’re putting into our fleet,” said John-Paul Hemingway, CEO of SES Networks.

Over the next five years in the SES-12 service region, SES expects the direct-to-home TV market to grow by some 80 million users, “and obviously, this satellite will be a great way to deliver that content to the homes across all of Asia-Pacific,” Hemingway said.

Industry projections show a five-fold increase in aircraft use of satellite communications services over the next five years, a doubling of maritime users and up to a million or more additional “connected enterprises.”

And satellite internet service promises to grow at an equally astronomical rate.

“We believe there are around about a billion people in the Asia-Pacific market that still don’t have good connectivity through the devices you’re all holding in your hands right now,” Hemingway told reporters last week. “And satellite is one, and sometimes the only, way to connect 2G, 3G and 4G to those markets.

“If you take all those numbers together, this is really exciting for us,” he said.

I am a Catholic, I can’t kill anyone – Ex Governor claims