Rebecca Sharibu holds up a photograph that shows her daughter Leah, (left). Leah was kidnapped in February 2018 from her school in the town of Dapchi in northern Nigeria by Boko Haram. Photo by Chika Oduah. April 2018.

Dapchi, Nigeria (CNN) Under normal circumstances, Leah Sharibu would have shared a special birthday meal with her family under the bamboo covering protecting them from the Sahara desert dust swirling around them at their home in northeast Nigeria.

At some point during the celebration, they would have bowed their heads in prayer, asking God to bless Leah on her birthday and to make her dreams come true.
But this birthday, her 15th, was different and her family spent the day crying and fervently praying. They don’t know where she is.
Leah was one of the 110 schoolgirls kidnapped by members of the terrorist group Boko Haram in February from their school in Dapchi, in northeast Nigeria.
All the other kidnapped schoolgirls from Dapchi have been freed — except Leah who her friends say refused to renounce her Christian faith to Boko Haram.

Boko Haram has become notorious for kidnapping young men and women during their nine-year insurgency in northeast Nigeria.
The terror group has kidnapped more than 1,000 children in the country, famously kidnapping nearly 300 Chibok schoolgirls four years ago. More than 100 of the Chibok girls remain in captivity.
Thousands of parents whose children have been taken by Boko Haram never see their children again. 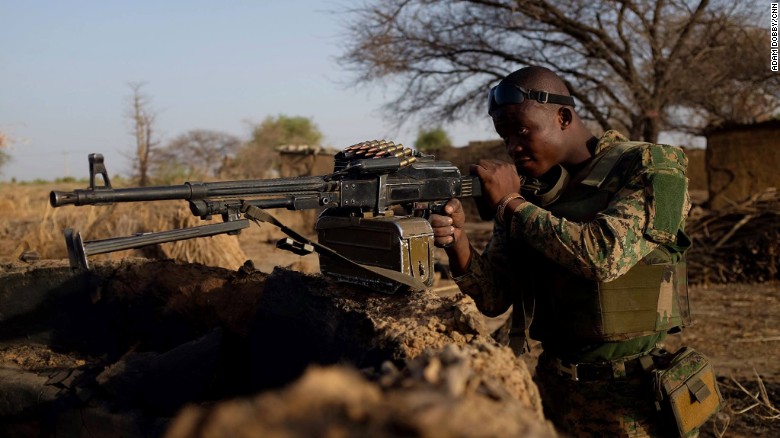 Photos: Penetrating Boko Haram’s stronghold: The Sambisa Forest
Under Operation “Lafiya Dole” — meaning “peace by any means” in Hausa — the Nigerian army is working under intense scrutiny to locate and return the stolen Chibok girls to their parents.
But the Dapchi kidnapping proved to be an exception. In a highly unusual move, the militants returned the schoolgirls in March to their hometown after negotiations with the Nigerian government.
The terrorists reportedly told parents, as they returned the hostages, not to allow their daughters to go back to school. They said, “boko is haram” (loosely translated as Western education is forbidden).

‘She refused to convert to Islam’

Rebecca, Leah’s mother, recalled how the overjoyed parents celebrated the sudden and unexpected return of their daughters after one month away.
Rebecca, 45 said she waited patiently as each parent was reunited with their daughter.
It suddenly dawned on her that Leah was not among the group of girls released. “Where is Leah?” she asked anxiously. One of the freed girls told her that Leah had been left behind.
“She refused to convert to Islam,” another told her.
That was the moment Rebecca’s world came crashing down around her. She collapsed and was rushed to the hospital. Even now, her health problems persist.

Ten days ago, I visited Rebecca in Dapchi. Rebecca says no other journalist had ever come to see her, so she was surprised when I showed up at her doorstep and even more surprised when she learned I had traveled more than 2,000 miles from Senegal to see her. 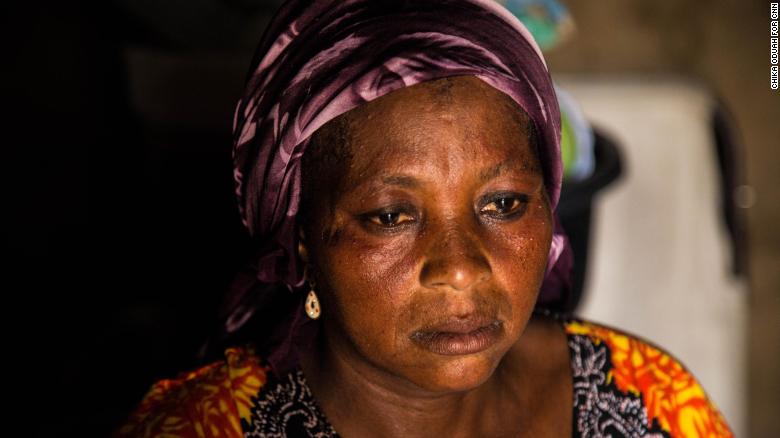 Rebecca Sharibu, the mother of kidnapped Dapchi girl Leah Sharibu.
We exchanged pleasantries as I set up my camera. She sat on a low wooden stump. A young woman could be heard in the back pounding yam in a mortar, she had a baby tightly strapped to her back with a colorful cloth.
It is obvious from looking at Rebecca that she is still not fully healthy, physically nor mentally.
Her eyes were in a daze, surrounded by drooping skin and deeply-etched lines. Her breaths came in haggard waves. She twisted the corners of her mouth downwards in a permanent frown.
Slowly, she began to speak. “They said she should turn to Muslim before she enter motor and then she said she would never do that,” she told me, looking down at one of Leah’s photos.
She describes Leah as hardworking and quiet, a girl who enjoyed going to church. She sang in the choir. The local pastor, Daniel Auta, said Leah had a beautiful voice, soft and melodic.
“When my daughter comes back, I will not allow her to go to that school again,” Rebecca said.
The girls high school in Dapchi is not far from Rebecca’s home. Outside the campus, soldiers are posted at the main gate and members of a volunteer vigilante force posted at the other.
On the day the abduction happened, there was no security at the gate.
The school recently opened again but none of the abducted Dapchi girls have resumed their education, although 20 of them were given scholarships to a neighboring private school in partnership with UNICEF.

The Dapchi school was established nearly 40 years ago. The classrooms are in poor shape, with gaping holes in the tiled floors and broken windows everywhere. There’s not much running water and the dorms where the female students live don’t even have beds.
It is hard to comprehend that more than 900 young girls were learning in these dire conditions.
Rebecca said no official from the Nigerian government has even visited her.
“Only Christian organizations have been coming to see us. No one from government. We are on our own,” she said.
When CNN contacted Nigerian presidential aide Femi Adesina about her comments, he referred CNN to the Yobe State governor office. The state office in turn referred us to speak with the federal government about the family’s concerns when they were contacted by CNN.
In April, the Nigerian government said a disagreement between members of Boko Haram had caused a breakdown in negotiation talks for the release of remaining schoolgirls in the group’s captivity.
At the far end of the bungalow is Leah’s bedroom. The empty room is a painful reminder and casts a dark shadow as the family walk past it daily for the past 85 days.
Leah’s brother, Nathaniel junior, came to sit beside his mother.
Together, they sat in silence, wondering if they would ever see Leah again.

This story has been updated to clarify that Sharibu has been held by Boko Haram for 85 days not 84 as earlier reported.