Liverpool star Mohamed Salah deserves to be talked about for the Ballon d’Or, according to team-mate Dejan Lovren.

Salah’s spectacular season continued on Tuesday, scoring twice and setting up two others to lead Liverpool to a 5-2 win over Roma in the first leg of their Champions League semi-final.

The Egypt international has netted 43 goals in 47 games in all competitions in his first campaign at Anfield.

Lovren said those performances meant Salah should be among the main contenders for the Ballon d’Or alongside Lionel Messi and Cristiano Ronaldo.

“He is the one. He is becoming the superstar. It looks easy what he does but it is very difficult,” Lovren told UK newspapers.

“If he continues like that – I don’t know if this is the right time to put pressure on him – but I believe he should be regarded as one of the best three in the world at the end of the year.

“He deserves to be mentioned for the Ballon d’Or – when people talk about Messi and Ronaldo they should also talk about Salah. He deserves the credit but I think he deserves even more to be honest.” 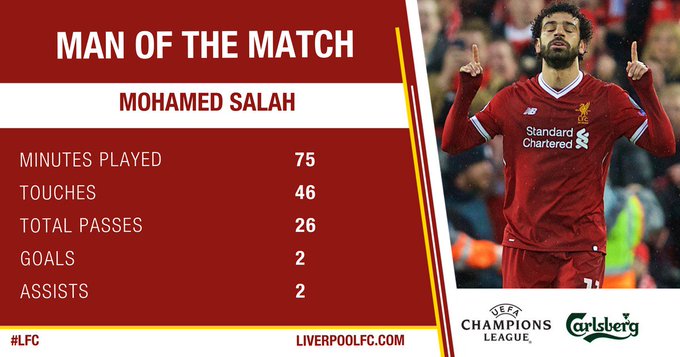 Either Ronaldo or Messi has won the Ballon d’Or in every year since 2007, when then-Milan star Kaka claimed the coveted individual honour.

Lovren believes Jurgen Klopp’s style at Liverpool is perfect for Salah, who arrived from Roma in the off-season.

“We help him, the manager helps and this style of play helps him a lot. He didn’t play that style before at Basel, Chelsea and Roma,” he said.

“They had different styles and this style suits him perfectly. Hopefully he can stay injury free.”