Russian Foreign Minister Sergey Lavrov will visit North Korea on Thursday, the Russian Ministry of Foreign Affairs said in a statement, the latest move in Pyongyang’s push for diplomatic rapprochement.

Lavrov is expected to discuss not only the situation in the Korean peninsula and the wider region, but also the relationship between the two countries, according to the ministry.

His visit comes as North Korea, the US and South Korea intensify efforts towards convening a historic summit between North Korean leader Kim Jong Un and US President Donald Trump. On Wednesday, American officials crossed the demilitarized zone into North Korea to meet with officials there, South Korean media reported, purportedly to discuss the substance of any talks should they occur.

North Korean Foreign Minister Ri Yong Ho had extended an invitation to Lavrov to visit the countryon a trip to Moscow on April 10.

The long-time Russian foreign minister has previously traveled to Pyongyang, including in 2009 during an earlier round of negotiations on North Korean disarmament.

There were no discussions during the April 10 meeting of either Russian President Vladimir Putin or North Korean leader Kim Jong Un visiting each other’s capitals, Lavrov said at the time, but added that both leaders “regularly exchange statements.”

North Korean and US officials have been spotted in Singapore, ostensibly planning the logistics of the event which was scheduled for June 12 in the city-state until Trump called it off last week.

He has not said definitively that the summit was back on, but the shuttle diplomacy between the three nations to find common ground has been a positive signal to observers that it will go ahead.

As Lavrov arrives in Pyongyang, Kim Jong Un’s right-hand man Kim Yong Chul will be in New York meeting with US Secretary of State Mike Pompeo. Trump confirmed Kim’s travel in a tweet on Tuesday, and said the trip was a “solid response” to his letter from last week to Kim Jong Un.

In his letter Trump had decried the “tremendous anger and open hostility” seen in statements out of North Korea, but also said he looked “very much forward to meeting” Kim Jong Un.

The forging of a relationship with the US has North Korean allies like China and Russia concerned that it would hinder their influence and standing with Pyongyang. 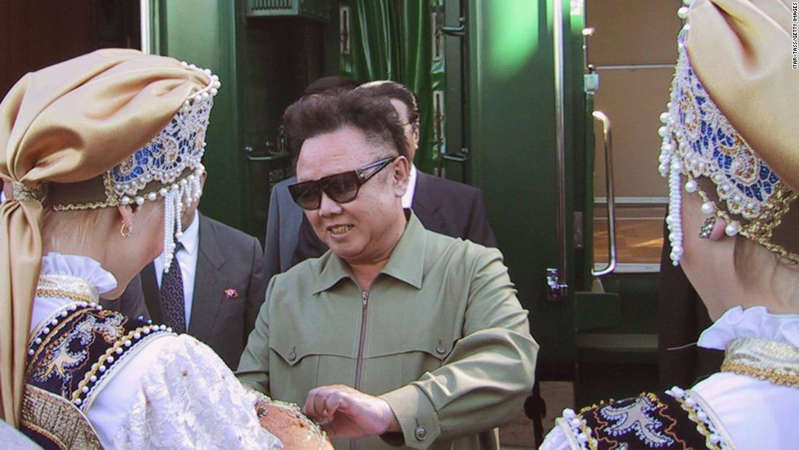 © Itar-Tass/Getty Images Late North Korean leader Kim Jong Il is greeted by women in traditional costume as he arrives August 1, 2001 at the train station in the Siberian city of Omsk, Russia for the first stopover on his train journey to Moscow. Kim met Russian President Vladimir Putin on August 4.

Putin had criticized Trump’s decision to cancel the summit, telling reporters last week that “we in Russia view it with regret because we really counted on this very significant step toward the de-escalation of the situation on the Korean Peninsula and that this will be the beginning to the whole process of denuclearization.”

He went on to say that Russia and its partners would work to try to bridge the gap between the US and North Korea, and said it would “be better to revert to the mechanisms which have worked quite well to create some kind of dialogue.”

Even though the two nations established relations 70 years ago, the shadow once cast by Russia has lessened in North Korea as Moscow’s global influence has waned and its own economy has been shaken by international sanctions.

“Russia has far less influence or leverage with North Korea than China does, and that’s not because of the military stuff, it’s purely because of money,” said Bruce Bechtol, a professor of political science at Angelo State University who has authored several books on North Korea.

He said Russia is the only country other than China that presents a “semblance of being an ally” to the isolated regime.

“During the Cold War, Russia subsidized everything in North Korea. North Korea was not a poor country, it was simply a subsidized member of what we can now call the Soviet Union’s satellite states,” he told CNN.

That all ended in 1991, said Bechtol, when the Berlin Wall came down, communism in the Soviet Union and its member states collapsed, and Russia opened its economic doors to the West.