Real Madrid against Atletico Madrid will see some of the key figures to Spain’s World Cup hopes take to the pitch against each other.

Spain’s triumph at Euro 2008, which started their greatest ever period on the international stage, was built using a real mix of club components.

They won the final 1-0 against Germany, courtesy of a goal from Liverpool striker Fernando Torres, set up by Barcelona midfielder Xavi. Players from Real Madrid, Valencia, Villarreal and even Real Mallorca all appeared in that match in Vienna.

Two years later, when they won the World Cup by the same scoreline, the influence of Pep Guardiola’s Barcelona was clear. Seven of the starting XI played their club football at Camp Nou, although one, David Villa, was a new signing and yet to play a game; the rest were from Madrid, and one, Joan Capdevila, from Villarreal.

By the time of their successful European Championship defence in 2012, the Barca and Madrid dominance was in effect: David Silva was the only Spain player to start that 4-0 win over Italy who did not play for either of his country’s biggest two clubs. Guardiola had stood down at Barca, but his imprint on the national team remained.

After the serious blip of four years ago, Spain are one of the favourites for the World Cup once more. They breezed through their qualifying phase and humiliated Argentina in their most recent friendly match, and few would bet against them at least reaching the semi-finals in Russia.

Unusually, though, Barca’s impact will have been reduced. Many of the key components of Julen Lopetegui’s exciting side, as well as the in-form hopefuls, are from the capital. Sunday’s derby match in LaLiga will pit several of them against each other, and offers a chance to nail down a place in the national team for the opening World Cup game against Portugal on June 15.

ISCO-ING TO BE A REAL BATTLE

In Spain’s 1-1 draw with Germany, six of their players involved were from Madrid, three from Barca, and three from Atletico. The rest came from assorted clubs.

In the hammering of Argentina, Madrid’s number dropped by one – Nacho missed out – but the other tallies remained the same. It suggests Lopetegui is happy with his core team and will merely be fine-tuning between now and June.

The back five is almost certainly set in stone: David de Gea in goal, Dani Carvajal, Sergio Ramos, Gerard Pique and Jordi Alba in defence. Andres Iniesta and Sergio Busquets are also likely to start against Portugal, if fully fit.

The remaining positions are largely up for grabs, though, and several players involved in Sunday’s Madrid derby could stake a claim.

Atleti team-mates Koke and Saul Niguez are candidates for one of the three central midfield positions, even though both usually play slightly differently for their club. The wide attacking roles could be filled by Madrid duo Lucas Vazquez and Marco Asensio. Isco, who scored a hat-trick against Argentina, is an option for either position.

The number nine slot is also available. With former Madrid man Alvaro Morata struggling at Chelsea, Atleti’s Diego Costa could force his way into the team with a strong end to the season, particularly if he scores at the weekend. 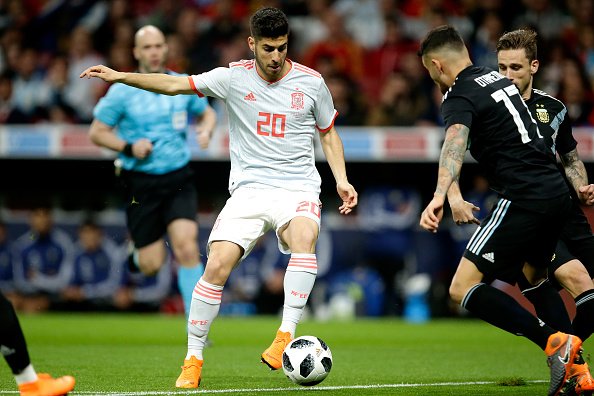 WHO HAS THE BEST CHANCE?

Koke would be very unlucky at this stage not to at least make the World Cup squad. He has shown great versatility in midfield for club and country and some of his dovetailing with Thiago Alcantara against Argentina was delightful.

The same can be said of Saul, although Koke has been in more consistent club form and a good performance against Madrid might just give him the edge.

In the attacking trio, Isco is most likely to start, provided he can keep his place in Zinedine Zidane’s side after an up-and-down few weeks. Asensio has played extremely well under Lopetegui, too, but is unlikely to displace David Silva from the starting line-up. Given the choice, though, he would probably be included ahead of Vazquez.

Costa seems a certainty to be on the plane to Russia, too, and most likely in the first XI against Portugal. The more romantic Atleti fans might hope Fernando Torres could earn an international recall, but he has only scored twice in LaLiga all season. 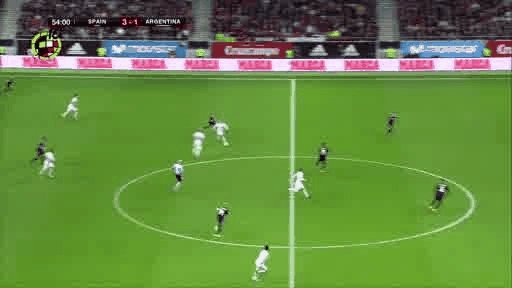 DOES THIS MEAN A STYLE SHIFT?

If best guesses are correct, Spain’s first World Cup starting line-up will consist of one Atletico player, three from Madrid, and four from Barca, which rather highlights the importance the Catalans still carry.

That said, this will be the last World Cups for Iniesta and Pique and, perhaps, Busquets. What’s more, depending on the type of opposition and the fitness of the older contingent, Lopetegui could well decide to field the younger, sharper legs of the capital’s rising stars.

Spain’s adherence to possession-based football will not be abandoned, but Lopetegui has shown a willingness to embrace pace and power in attack at the expense of monopolising the ball. It’s why Asensio, Saul and Costa in particular are favourites of his, and why the likes of Juan Mata and the quick but diminutive Pedro cannot get a look-in.

Madrid’s success in the Champions League in recent years has owed plenty to fast, ruthless attacking play. Atleti, meanwhile, have maintained challenges at home and in Europe with a physical edge. These qualities have become important supplements to ‘the Barcelona way’ and made Spain a fearsome prospect again. Sunday’s derby at the Santiago Bernabeu will prove why.