A feisty affair at Santiago Bernabeu resulted in Real Madrid overcoming Bayern Munich to reach the finals of the UEFA Champions League.

Two teams capable of achieving anything on the night? Check. Two master tacticians at the helm of it all? Check. An iconic stadium? Check. The grandest stage in Europe? Check.

After racking up a clinical win at the Allianz Arena last week despite a below-par performance, Real Madrid hosted the record Bundesliga champions Bayern Munich at the Estadio Santiago Bernabeu in the Spanish capital of Madrid.

Los Blancos would have hoped to extend their winning run against the Bavarians to seven and had chances aplenty to do the same – but had to hold their nerves to settle for a draw in the end at their fortress.

A similar story transpired in the second leg of the competition as compared to last week with Bayern scoring first, courtesy of right-back Joshua Kimmich. Real equalized, and then went ahead via a howler of a mistake from Bayern. Rafinha was the culprit last time, Sven Ulreich the guilty party tonight.

James Rodriguez haunted his principal club on his return as he equalized for Die Roten, but he couldn’t help his current side cross the line.

Let us now get straight into all the noteworthy facets of tonight’s encounter.

For what it’s worth, Keylor Navas has had his fair share of criticism over the past few months, nay years, if I may add. The Costa Rican has been considered by many as the weakest link in the Galacticos’ defence.

The Real Madrid No. 1 cannot be let off as being a mere scapegoat either with his poor reflexes and faulty distribution in the recent past suggesting otherwise. However, he silenced all the sceptics as he commanded his posts astutely and fended off Bayern attackers on several occasions when they were in on goal.

From keeping out Alaba’s deflected shot to parrying away Tolisso’s attempt from roughly six yards out, Navas was resolute while doing his duty between the sticks.

On the other end of the pitch though, Sven Ulreich pulled off probably the biggest gaffe of the season in European competition to gift Karim Benzema his second goal on the night.

Tolisso was caught in sixes and sevens in his own defensive third of the pitch as Madrid attackers closed in on him. Baffled, the Frenchman favoured putting in a back pass to Ulreich between the sticks.

The pass, however, was undercooked and it tempted Benzema to chase it down, but was strong enough to reach the German shot-stopper. Ulreich seemed to have forgotten that it was a back pass and he could not use his hands to control it as he appeared to be getting ready to pick up the ball.

As soon as he made enough computations in the back of his head to arrive at the impending repercussion of an indirect free kick in case he employed his hands, Ulreich simply shied away at the last moment and the trailing Benzema slotted the ball into an empty net to tip the odds in Madrid’s favour. 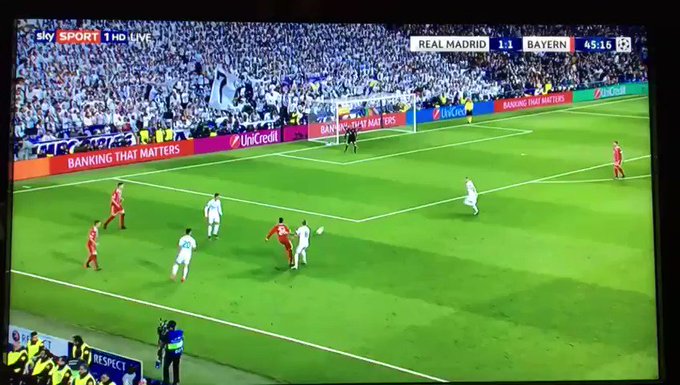 It was the second gift to Los Blancos by Bayern in as many matches, with Marco Asensio making the most of Rafinha’s miscued pass in the first leg.

Bayern’s most expensive signing yet, Corentin Tolisso was given the nod to start ahead of Javi Martinez in a deep role for Die Roten as the Spaniard still wasn’t in the best shape after coming off against Madrid in the first leg with concussion issues.

The former Lyon man meshed well with his midfield partners James Rodriguez and Thiago Alcantara to dictate the flow of things in the middle third of the pitch.

Asensio was wholly shut down by Thiago who excelled in his box-to-box role and attempted incisive balls to put pressure on the back line of the Galacticos.

The Real Madrid quartet of Kroos, Asensio, Modric and Kovacic had a combined total of 2 key passes on the night – a number that was matched by Rodriguez alone for Bayern. The Colombian had five shots including a goal, while Tolisso forced a brilliant save off Navas and was awarded the assist for Kimmich’s opener.

What was also noteworthy was how often the Bayern trio found themselves in attacking positions while their counterparts in the white shirts scurried back into their own box.

Modric spent the night trying to cover up the acres of space that Lucas Vazquez was offering on the right side of the defence, whereas Kroos and Kovacic never got going.

Asensio was always kept in check by Thiago. The former summed up his night late into the game when he got the ball in his own half and had plenty of space to start a counter but slipped rather inexplicably and hurt a muscle or two in the process.

The Bayern defence locked down the 5-time Ballon d’Or winner once again tonight, keeping him goalless twice in as many games. Mats Hummels was still as cumbersome as he was during the first leg at the Allianz Arena, but Niklas Sule was up to the task of keeping Cristiano Ronaldo under wraps.

The herculean German never allowed the Portuguese to get the better of him on the dribble and was physical enough to keep the Madrid No. 7 at bay. Sule was assisted by other Bayern players circling around Ronaldo to render him ineffective during set-pieces and cutting off open lanes when he was found in possession during open play

With that being said, the Portuguese had the goal at his mercy early on in the second half and he pulled off a blunder. Marcelo punted in an impeccable cross from the left flank in the 54th minute that was meant to meet Ronaldo at the far post, but the latter skied his volley from a few yards out. Los Blancos were leading 2-1 at that moment and the goal would have killed the tie there and then.

On the flip side of things, Karim Benzema, who has had so many naysayers calling him out on his incapacity to score goals, simply let his toil on the pitch do the talking. The Frenchman scored both the goals for the home side to propel them to a third consecutive UEFA Champions League final.

Benzema made an impact early on in the game when he caught the Bayern defence off guard from a Real free kick to produce a chance for Ronaldo which he eventually scuppered.

Marcelo did well to find him with a cross for Madrid’s opener, but it was the movement of the Madrid No. 9 that allowed him to roam free in the Bayern box. He was also gifted a goal by Ulreich, but credit has to be given to the pressure he applied on Tolisso and the custodian.

Benzema stopped a few sneerily wagging tongues in criticism of him with his performance, all things considered.

When Dani Carvajal went off the pitch in the first leg of the Allianz Arena in the second half of the first leg, Lucas Vazquez took up the role of the right-back with Casemiro coming to his aid.

The same strategy was expected to be adopted tonight, with Carvajal set to miss the game and Nacho not completely fit. However, Zinedine Zidane preferred to start Mateo Kovacic with the aforementioned Brazilian on the bench. The onus thus fell on Luka Modric to take up the mantle and cover up the spaces left open by the makeshift fullback Vazquez.

While the Croatian did so commendably, it took away the offensive part of his game as he was physically spent seeing off an ever prowling Franck Ribery with David Alaba always available to lend a helping hand on the overlap.

This does not take away the fact that Vazquez was found wanting on many occasions by the Bavarian duo. Die Roten had a certain preference to play from the left flank when in possession and it was easily visible why.

More than two years and 32 UEFA Champions League matches have flown by, however, Zinedine Zidane is yet to be eliminated from the Champions League. Zizou’s side made history last year when they became the only team in the history of Europe’s premier competition to defend the title.

This year, Los Blancos are one win away from becoming the first side to do a hattrick of UEFA Champions League wins. Standing in their way will be either Liverpool or AS Roma, who will be facing off tomorrow. Liverpool are the favourites, but the Romans cannot be taken casually after their beatdown of the Blaugrana a few weeks back at the Stadio Olimpico.

This, however, does not change the fact that Real Madrid have had a poor domestic season with eternal rivals Barcelona already having secured the domestic double. The El Clasico is up next on the weekend. But with silverware and history still on the line, a guard of honour would be least of concerns for the Galacticos.

Bayern Munich, on the other hand, were the only team remaining in the Champions League in quest of a treble this season. But their hopes have now been quashed and they will have to remain content with a domestic double – if they manage to beat their future manager Niko Kovac’s current side Eintracht Frankfurt in the finals of the DfB Pokal. 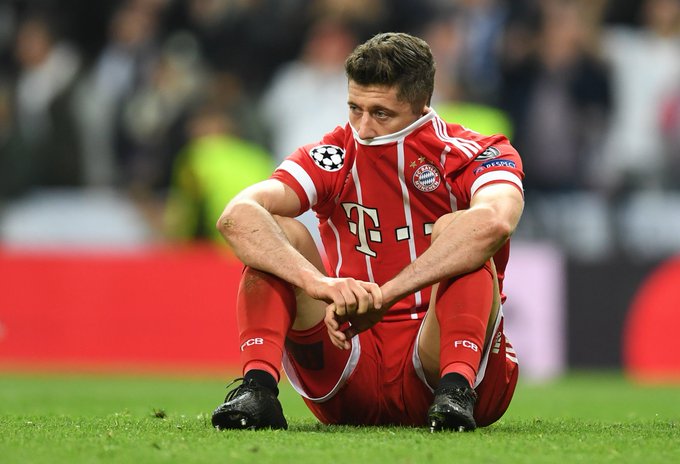 Jupp Heynckes returned from retirement to lead Bayern towards the light after the side flirted with darkness in the opening months, but the joy ride is set to come to an end soon.
Loading...
Post Views: 387
Continue Reading
Bayern MunichBenzemaChampions LeagueKeylor NavasKimmichRodriguezRonaldoSantiago Bernabeu
188
Share FacebookTwitterGoogle+ReddItWhatsAppPinterestEmail