Sergio Ramos felt Cristiano Ronaldo fully deserved the applause he received from Juventus fans for his goal on Tuesday.

Real Madrid captain Sergio Ramos admits Cristiano Ronaldo is showing frightening form and deserved the applause he received in the win over Juventus.

Ronaldo scored twice to help titleholders Madrid to a 3-0 Champions League quarter-final first-leg win in Turin, the second a bicycle kick that earned an ovation from the home fans at the Allianz Stadium on Tuesday.

The five-time Ballon d’Or winner is the first player to score in 10 consecutive matches in the competition, a run that stretches back to last season’s 4-1 final win over Juve, and is now the leading goalscorer from Europe’s top-five leagues, with 39 in all competitions.

And Ramos says it was “amazing” to see his team-mate’s second goal from on the pitch.

“He’s in terrifying form,” said the defender. “It’s to our benefit and hopefully he stays like that all season. His goal was remarkable but we value the collective work.

“It was an amazing goal. It was captivating to see the bicycle kick and he won the prize of the recognition of the fans, who have seen him perform at this level for many years.” 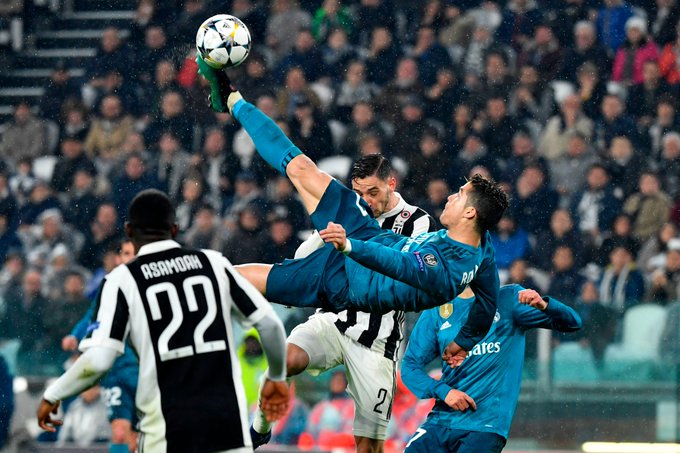 Paulo Dybala was sent off two minutes after Ronaldo’s second goal, and Marcelo then scored a third to put Madrid in a commanding position ahead of the return leg at the Santiago Bernabeu.

Ramos thinks the result means his suspension for that meeting in the Spanish capital will not have a huge impact.

“Given the result, maybe it’s better that I’m missing the second leg! It’s not so bad,” added the Spain international, whose ban came about due to a booking he picked up on Tuesday.

“It was a complete performance in general terms. It was an important step. Everything happened as we had planned. It’s a very good result and we also kept a clean sheet.

“The tie isn’t over. We were able to score three but we have to kill it off.”

Breaking news: You have to applaud Ronaldo after wondergoal Allegri