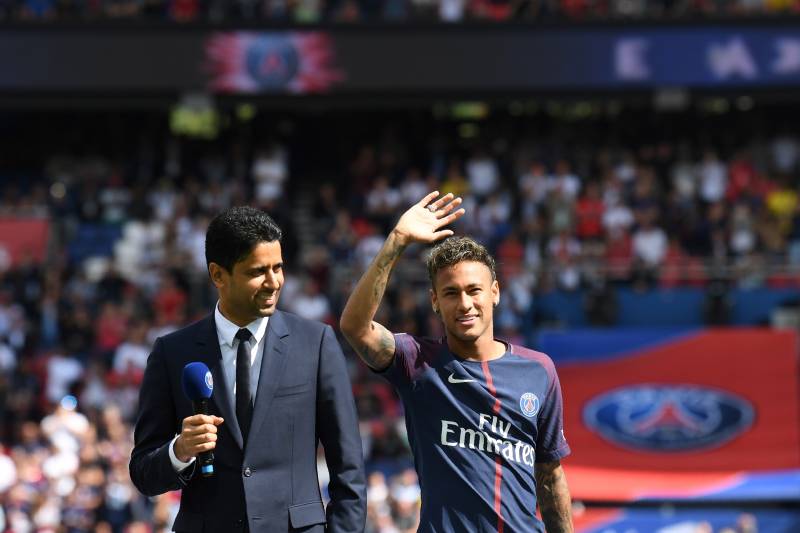 Neymar is reportedly set for talks over his future with Paris Saint-Germain president Nasser Al-Khelaifi, who has flown to Brazil where the star is recovering from surgery on a fractured metatarsal.

Al-Khelaifi wants to talk about Neymar’s future as he knows the Brazilian is a top summer target for Real Madrid, according to Telefoot (h/t Marco Ruizat AS).

Neymar thinks his move to PSG was a mistake, and Al-Khelaifi wants to take charge of the situation as the star’s injury means he may not return to the French capital until after the FIFA 2018 World Cup.

Real Madrid have already met with Neymar’s father and been told that he could be prised away for €400 million, according to Martio Cortegana at AS.

PSG sporting director Artero Henrique has also seemed to cast doubt on whether Neymar will stay at the club. Henrique was asked about Neymar’s PSG future and said “I cannot guarantee it,” per Le Parisien (h/t Marca).

Meanwhile, Real Madrid coach Zinedine Zidane has given his verdict on the Neymar saga, per Spanish football correspondent for AFP Tom Allnutt:

“Neymar could play in all the clubs because he is very good, like many players… When they bought me they paid 72. It seemed crazy to me… It can be that in the next 10 years someone will pay 400, or sooner, I do not know.”

Neymar has enjoyed a stunning first season at PSG, scoring 28 goals and contributing 16 assists in 30 appearances in all competitions. The French side look set to regain their Ligue 1 crown but have once again disappointed in the UEFA Champions League.

European glory is the club’s ultimate aim and a main reason for their huge investment in Neymar, but they were knocked out at the last-16 stage by Real Madrid and look to be some way off being able to challenge for the European Cup.

Neymar has also been linked with a shock return to former club Barcelona, per Mundo Deportivo (h/t Max Winters for Mail Online).

ESPN FC’s Jonathan Johnson said he will not go back to the Camp Nou and will stay at PSG for now:

Neymar will not go back to Barcelona, but he will not finish his career in Paris. Shock, horror. 2 more seasons in Paris, I reckon, & then a move. If by some miracle, PSG win next season’s UCL, perhaps next summer.

Real Madrid may want to sign Neymar, but a price of €400 million will be a huge stumbling block, even for a club of their financial might. PSG will also be reluctant to sell their star man after just one season, but there seems little doubt that speculation over Neymar’s future is set to continue.
Loading...
Post Views: 324
Continue Reading
134
Share FacebookTwitterGoogle+ReddItWhatsAppPinterestEmail

Breaking news: Where will Florentino find the €400M to pay for Neymar?