Breaking News: Ozone-destroying emissions are on the rise and scientists don’t know why

A plane flies in front of the sun. Chemicals that deplete the ozone layer, which protects us from the sun’s harmful rays, are on the rise.

(CNN) Banned chemicals which can cause holes in the ozone layer are on the rise, according to a new report, and no one knows who the culprit is.

The hunt is now on to find and stop the mysterious source of the emissions, which scientists believe are emanating from somewhere inside of east Asia.
Chlorofluorocarbons, or CFCs, used to be common in refrigerators, aerosol cans and dry cleaning chemicals. But they were banned under the Montreal Protocol of 1987, after it was discovered they contributed to the creation of a giant hole in the ozone layer which forms over Antarctica each September.
Sponsor Content
Discover how Thailand is embracing the future
See how Thailand is transforming the Eastern Economic Corridor to lead the path ofinnovation in ASEAN.

Promoted By Thailand Board of Investment

The ozone layer, a fragile shield of gas, protects animal and plant life on Earth from powerful UV rays. When the ozone layer is weakened, more UV rays can get through and affect humans, making them prone to skin cancer, cataracts and other diseases. There also may be consequences for plant life, including lower crop yields and disruptions in the ocean’s food chain. 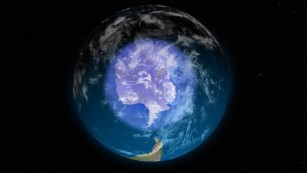 The Antarctic ozone layer was starting to heal 01:20
After concerted global action, the hole in the ozone layer was gradually beginning to mend, but scientists at the US National Oceanic and Atmospheric Administration (NOAA) have discovered a sharp rise in CFCs from an unknown source.
“We’re raising a flag to the global community to say, ‘This is what’s going on, and it is taking us away from timely recovery of the ozone layer,'” NOAA scientist Stephen Montzka, the study’s lead author, said in a statement.
“Further work is needed to figure out exactly why emissions of CFC-11 are increasing, and if something can be done about it soon,” added Montzka
The team said the emissions were most likely due to new, unreported production from an unidentified source in East Asia. It is the first time levels of one of the three most abundant, long-lived CFCs has increased for a sustained period since the late 1980s.
“In the end, we concluded that it’s most likely that someone may be producing the CFC-11 that’s escaping to the atmosphere,” he said.
“We don’t know why they might be doing that and if it is being made for some specific purpose, or inadvertently as a side product of some other chemical process.”
Montzka said if the source of the new emissions can be identified and contained soon, the damage to the ozone should be minor, but warned if not remedied soon, substantial delays could be caused to the already slow recovery of our protective atmosphere.
Loading...
Post Views: 277
Continue Reading
emissionson the riseOzone-destroyingscientists
155
Share FacebookTwitterGoogle+ReddItWhatsAppPinterestEmail