Barcelona have produced historic European comebacks and Ernesto Valverde does not want them to be on the wrong end of one against Roma.

Ernesto Valverde is wary of a Roma fightback despite Barcelona taking a handsome 4-1 advantage to the Stadio Olimpico for the second leg of Tuesday’s Champions League quarter-final.

Luis Suarez rounded off victory last week to give Barca a foot in the semi-finals but Valverde feels Edin Dzeko’s away goal at Camp Nou was a demonstration of the threat Eusebio Di Francesco’s side can carry with home support.

“They’re going to have even more intensity tomorrow because when you’re playing catch-up, you look to get the first goal and I imagine that will be their aim, so we’ve got to be alert,” he told a pre-match news conference.

“We know that Leo [Messi] is always going to be able to be decisive in the game. There are reasons to be cautious of them, too – Dzeko for example.” 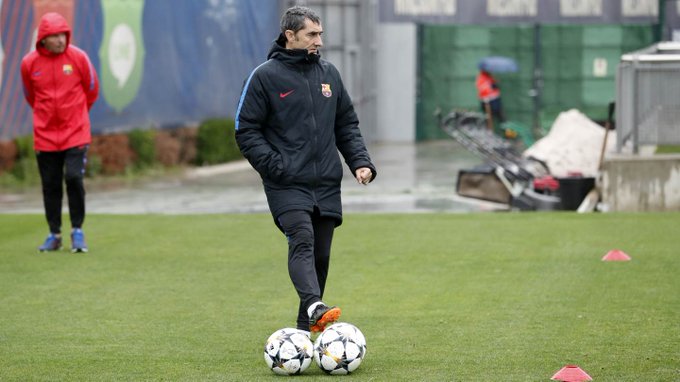 Ernesto Valverde: “If we are at our level then we are a side against whom it is difficult to score and we will have a chance to win” #RomaBarça

Indeed, Barca only need to look to their own exploits against Paris Saint-Germain in the round of 16 last season, where they overcame a 4-0 thumping at the Parc des Princes to progress in dramatic fashion, to know expecting the unexpected is to be advised.

“The main error we could make is thinking we’re in the semis already,” added Valverde, who took exception to the tone of questions he felt suggested Barca progress is a formality.

“We’re certainly not overconfident. Speculating about the result is dangerous.”

Breaking news: The King called me to congratulate Ronaldo on Juventus wondergoal – Perez