Neymar has reportedly had a successful medical examination from Paris Saint-Germain and Brazil’s team doctors and has also had the medical boot protecting his broken foot removed.

According to MailOnline’s Jordan Seward, the forward was examined by PSG doctor Eric Rolland and Brazil’s national team doctor Rodrigo Lasmar, and the pair have reported he is “progressing well” as he bids to recover from foot surgery in time to feature in the World Cup.

Neymar will return to France to work on his rehabilitation at the Ooredoo Training Centre in Paris in several days, but until then he will continue recovering in his native Brazil.

The 26-year-old recently revealed on social media that he was able to walk unsupported, per Goal UK: 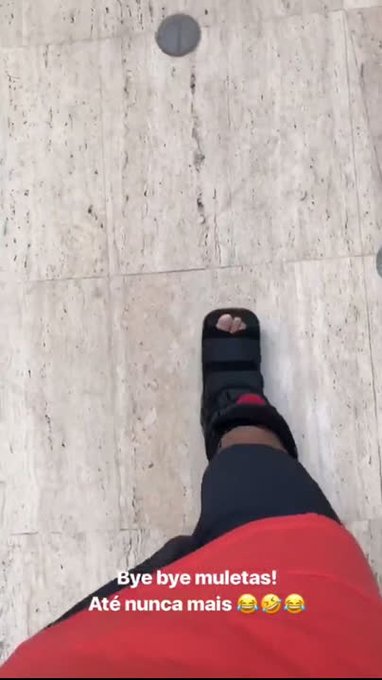 He is still weeks away from playing again, having recently said he expects to be back in the latter half of May when he has his final medical examination.

Neymar broke his metatarsal in February, and the injury brought a premature end to his campaign unless he’s able to feature for PSG again before their season draws to a close on May 19 against Caen.

Les Parisiens’ domestic charge has continued unabated despite the loss of their star, as the club won the Coupe de la Ligue on March 31, wrapped up the Ligue 1 title on April 15 and will take on third-tier side Les Herbiersin the Coupe de France final on May 8.

The injury kept him out of the second leg of their UEFA Champions League last-16 clash with Real Madrid, though, and without him the side were unable to turn around a 3-1 deficit.

As for Brazil, they have plenty of attacking options even if Neymar were to miss the World Cup:

Thanks to the management of Tite—who has added pragmatism and restored a little flair since he took charge in 2016—and the emergence of a talented young generation of players, the team are far less reliant on Neymar than they were in 2014 when they collapsed 7-1 to Germany in the semi-final after losing him to injury in the previous match.

Nevertheless, the forward is a talisman for the Selecao, having scored 53 goals in 83 appearances, and they’re at their best with him on the pitch.

Months out with injury will hardly be ideal preparation for him ahead of the tournament, but it seems promising we’ll see a player of Neymar’s talent at the World Cup at an age where he has reached or is close to the peak of his powers.