Barcelona scored twice in 53 seconds during a thrilling LaLiga clash with Sevilla to earn a 2-2 draw, leaving Vincenzo Montella shocked.

Vincenzo Montella was “angry” but still “proud” of Sevilla’s efforts after they were made to rue poor finishing in Saturday’s 2-2 draw with Barcelona, who were rescued late on by substitute Lionel Messi.

Sevilla produced arguably their best performance of the season against Barca, as they controlled much of the match and created a host of chances.

Joaquin Correa was guilty of spurning two particularly presentable opportunities in the first half, but the Argentina international made amends nine minutes before the break, setting up Franco Vazquez for a well-worked opener.

Luis Muriel – who also missed several fine chances over the course of the match – doubled their advantage soon after the break and openings continued to be crafted even after Messi’s introduction in the 58th minute.

But Luis Suarez pulled one back for the visitors two minutes from time and then Messi levelled things up from 20 yards just 53 seconds later, preserving Barca’s unbeaten record and leaving Sevilla coach Montella shell-shocked. 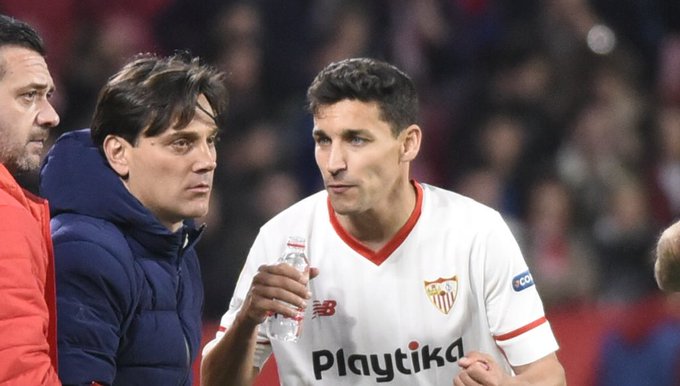 “We have to improve,” Montella told reporters. “When we can score, we have to score.
“We had many chances to close the game. It’s a shame because Barcelona has formidable players, and we are a little nervous now. For Tuesday [against Bayern Munich in the Champions League], we will have more desire.

“If we had finished earlier, it would have been better, but football is like that, we have to improve.

“I’m angry on one side, but on the other I’m proud because the team has controlled the game against Barcelona.”