Breaking news: Mkhitaryan could be back in two weeks – Wenger

There were fears Henrikh Mkhitaryan could miss the rest of Arsenal’s season, but Arsene Wenger now hopes to have him back much sooner.

Mkhitaryan suffered knee ligament damage in the 4-1 Europa League quarter-final first-leg win over CSKA Moscow and Wenger was concerned the Armenia international could be out for several weeks.

However, speaking after his side claimed a 2-2 draw in Moscow on Thursday to secure a 6-3 aggregate win, the Gunners boss was more optimistic.

“Yes, [it’s a] ligament strain and he should be out for two more weeks,” Wenger told a news conference. “Don’t be too worried. We have good medical staff and he’s very serious in his rehab.”

Arsenal were in danger of throwing away their first-leg lead, with CSKA taking a 2-0 lead into the final 15 minutes of the match before Danny Welbeck and Aaron Ramsey snatched a draw.

Wenger was impressed with Viktor Goncharenko’s side but reserved special praise for the way in which Welbeck started the move that led to his well-taken goal. 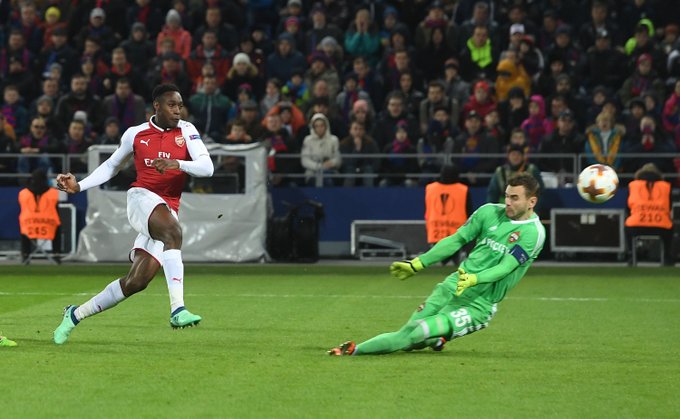 “You could see when you have a big difference after the first game it’s difficult to turn up with the same urgency than if a difference is very small and that played a part in the way we played in the first half,” said Wenger.

“I congratulated him [Goncharenko] because I felt that, in the two games, they played well. Especially tonight, they made my heart beat much quicker than I expected it to be. I wished him good luck as well for the rest of the season.

“I would say as well, above all, the qualities Danny Welbeck [has] – when you have your back to the wall, he looks like he has extra special motivation in his body and his head that can give you something extra special. That is something that is really exceptional that you do not find in many players.”

Goncharenko was proud of the way his side threatened to produce another stirring comeback in a week that has seen Roma overturn a first-leg deficit to knock Barcelona out of the Champions League and Juventus come close to doing the same to Real Madrid.

“I can say that, until 75 minutes of the match, we played extremely well and we were winning in a very justified way,” he said. “We took the lead and we were so close to winning this match.

“The speed that Arsenal was playing was extremely high and the schedule that our team is playing at the moment is also very tough, so we were hoping that we could speed up with the substitutions, but it didn’t happen.”

Breaking news: 5 reasons why you should love Cristiano Ronaldo