Zinedine Zidane felt for Gianluigi Buffon after the veteran Juventus goalkeeper was sent off against Real Madrid on Wednesday.

Zinedine Zidane hopes Gianluigi Buffon has not played his last Champions League game after he was sent off in Juventus’ dramatic quarter-final exit to Real Madrid.

Buffon saw red after furiously protesting referee Michael Oliver’s decision to award Madrid a stoppage-time penalty, which Cristiano Ronaldo converted as the two-time defending champions prevailed 4-3 on aggregate despite a 3-1 defeat on Wednesday.

The 40-year-old reacted angrily after Medhi Benatia was deemed to have fouled Lucas Vazquez at the death in the Spanish capital, ending Juve’s remarkable comeback.

It was Buffon’s first red card of his career in the Champions League and talk immediately turned to the iconic goalkeeper’s future, with the Italy international yet to decide whether he will retire at the end of the season.

Asked about Buffon’s dismissal, Madrid head coach Zidane – who was sent off in his last professional match after headbutting Marco Materazzi in France’s 2006 World Cup final loss to Italy – said: “I don’t think that he deserves to go out in this way, but there’s no going back on it now.

“What happened at the end of the game won’t change or take anything away from what he has done in the game.

“He’s a magnificent player and this perhaps wasn’t his last Champions League appearance.” 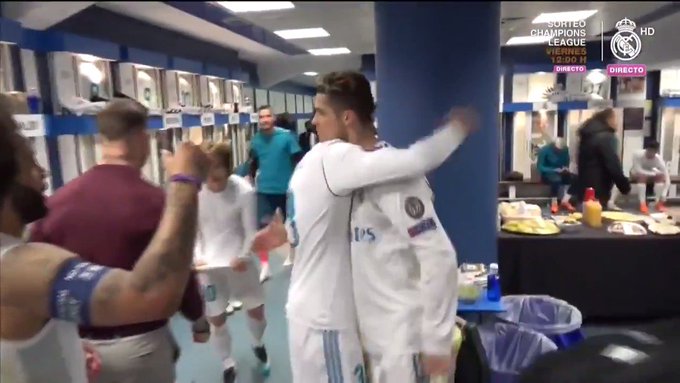 Madrid were fortunate to survive after falling 3-0 behind at the Santiago Bernabeu midweek, having won 3-0 in Turin last week.

But Madrid managed to avoid extra time as they broke the hearts of Juventus when Vazquez was fouled by defender Benatia in the final seconds.

“It was a penalty, they’ve told me it was a penalty. I didn’t see it. The ref awarded it and we can’t change that, but I think it was a penalty,” Zidane said. “Cristiano is used to these situations. He doesn’t feel pressure. He scored the penalty and we got the win.

“There is nothing left to say. We’re in the semi-finals and we’re happy with that. They played well but we were just average, the difference is we kept believing until the end. We deserved to go through to the semi-finals over the course of the tie and we can be pleased with that.”

Zidane added: “It wasn’t a strange game, but we didn’t expect to concede in the first minute. When that happens, heads drop and the opposition gain in confidence. They approached the game in the right way and we didn’t. We had problems controlling the game.

“I knew we would be up against it, but I didn’t expect what happened in the first minute. We knew that we’d have to dig in against a side that put in a great performance and that press high up the pitch.

“I didn’t see us going out because I’m a positive person. I told my players we were going to be troubled, that it would be tricky.”