Manchester City were undone over recent days by conceding batches of goals in quick succession – a problem Pep Guardiola has faced before.

Manchester City manager Pep Guardiola concedes he must solve vulnerabilities in his teams when it comes to conceding clusters of goals in quick succession.

City passed up the chance to seal the Premier League title in memorable style on Saturday as they let a 2-0 half-time lead against Manchester United crumble, their bitter rivals going on to a 3-2 victory that stunned an Etihad Stadium primed for celebration.

Paul Pogba netted twice in the space of 97 seconds to cancel out City’s goals from Vincent Kompany and Ilkay Gundogan with 55 minutes on the clock and Chris Smalling headed a 69th-minute winner.

That 16-minute collapse followed three Liverpool goals in the space of 19 first-half minutes at Anfield last Wednesday, leaving City facing a daunting 3-0 deficit in the second leg of their Champions League quarter-final next week.

A similar nightmare spell brought about City’s only other defeat to Premier League opposition this term – a 4-3 reverse at Anfield in January – and Guardiola acknowledged this anomaly is a concern that has haunted him previously in his coaching career.

“I thought many times about that. I dropped a lot of Champions League games in 10 or 15 minutes and I think about that,” he told reporters before recalling how a Lionel Messi-inspired Barcelona took apart his Bayern Munich late in the first leg of a 2015 semi-final.

“Maybe it is my fault. I have to think about it but I feel that when you dominate and create chances you are closer to winning the games.

“I think this season showed that with the numbers we have done in terms of goals and – when the team is stable – the chances we concede.

“I think we are the best with these type of players. We concede few. But it is impossible when the opponents arrive four times and score three goals. No system can sustain that. It’s so complicated.” 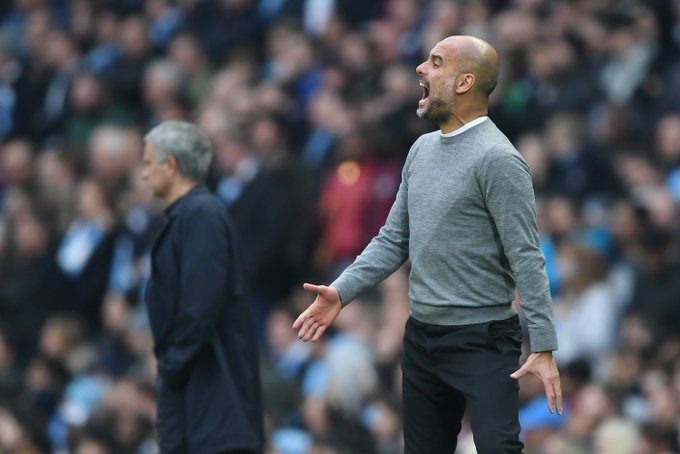 3 – This is the first time that a side managed by Pep Guardiola has conceded 3+ goals in two consecutive matches. Shellshocked.

With the opportunity for a morale-boosting win ahead of their mission improbable against Liverpool passed up, Guardiola accepts the derby collapse could linger over City’s midweek efforts.

“Yeah, it can happen,” he said. “It’s difficult in itself [beating Liverpool] and it’s difficult for our mood not winning against United.

“But maybe we ill improve for the future on that, to realise that sometimes it’s not enough, what you are able to do, to win the games.

“In the first half we tried to do what we’ve done all season but maybe it’s not enough to win at Champions League level or the Premier League.”

That brought Guardiola back to a familiar theme of calling upon City to be more clinical, with Raheem Sterling having passed up a pair of golden opportunities with the score at 2-0 on Saturday.

“But when you play against Liverpool or in Europe, when you have that momentum you have to close the door. And we didn’t close it.

“When Real Madrid and Barcelona are always there it’s because they have players up front who, when they have half-chances, score two goals.”

Looters list: “What is being disclosed today is a tip of the iceberg, says Oshiomhole