Liverpool have stormed their way into the semifinals of the UEFA Champions League with a 2-1 win over Manchester City in the second leg and thus ending Pep Guardiola’s European dreams.

Overcoming a 3-0 deficit from the first leg was always going to be a task for City but they started the game in the best possible fashion when Gabriel Jesus scored one just after 117 seconds. After that, it was a one-way road for the Cityzens as Guardiola’s men made innumerable attacks on Liverpool’s goal in the first half.

But call it City’s profligacy or Liverpool’s resilient defending, the Reds held on and then scored two vital away goals to clinch the match and subsequently the tie. Mohamed Salah and Roberto Firmino, Liverpool’s usual suspects, got on the scoresheet and ensured their side’s passage into the top four.

The second leg was as exciting as the first one with referee Mateu Lahoz dominating the headlines for all the wrong reasons. Pep Guardiola was sent off at the break for over appealing against a controversial decision.

A lot has to be discussed in this gigantic European fixture which we will do in the form of analyzing the five major talking points that emerged from the game:

#5 City domination in the first half

When City’s lineup was out, it took some time to get used to the idea that Guardiola was trying to implement. City played with only three recognized defenders with Fernandinho shielding them. Two blocks of three forwards followed them in what was a strange but solid setup by the City manager.

It meant that City used width more effectively, stretched Liverpool’s midfield and created more openings in the final third. The tactics bore fruit as the hosts scored one in the second minute itself. A barrage of attacks followed with City not giving Liverpool any time on the ball.

It was evident that City were up to the task. Ederson recycled the ball as quickly as possible, the ball boys were also getting in on the act as City completely dominated Liverpool.

But for all of their brilliant work in the first half, City had just one goal to show for it which ultimately proved to be their undoing.

19 – Goalkeeper Loris Karius attempted the most passes of any Liverpool player in the first half vs Man City (19). Pressured.

Manchester City had a mountain to climb in the second leg if they were to overcome Liverpool’s massive first-leg advantage. But their task was made all the more difficult, not by Liverpool, but by referee Mateu Lahoz.

The Spanish official had previously been criticized by Pep Guardiola when he awarded Napoli a penalty against City in the group stage. In this game, Lahoz made some huge calls which not only affected the game but also resulted in City’s ouster from the Champions League.

Leroy Sane’s goal that was ruled offside had, in fact, touched James Milner on its way to the German. It was a terrible call which could have otherwise given City a 2-0 lead at the break. Two penalty shouts for Raheem Sterling were waved on by the referee with the second of those looking a bit controversial.

Lahoz also did not see Sterling’s foul on Van Dijk in the first half and was too soft in awarding bookings. He then sent off Guardiola at the break for over complaining after facing the City manager’s fury. The Spaniard had a night to forget, with his disallowed goal being the major turning point of the match. 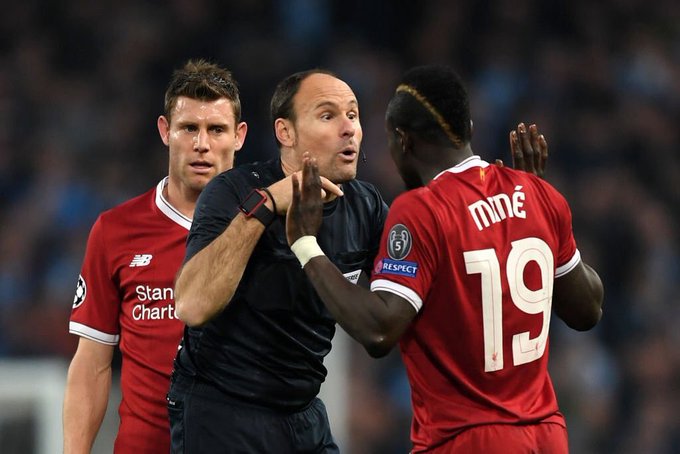 No, it was not Salah’s goal that ended City’s chances in this tie. It was Pep Guardiola’s sending off. The manager had been sent to the stands at the break after he barged onto the field to complain about Sane’s disallowed goal.

As the whistle blew for the start of the second half, City lacked the confidence without their manager on the touchline, to take the game to Liverpool. Just like how an orchestra cannot perform without its conductor, Manchester City failed to impress without their master tactician on the sidelines.

Manchester City lacked their directness and pace of attack from the first half as Liverpool started to enjoy possession for the first time in the second leg. Guardiola looked helpless in the stands.

It was a chastening experience for Liverpool in the first half. Their midfielders were chasing shadows, Mohamed Salah was devoid of any service with City running them round in circles. But Liverpool made sure they kept their advantage intact for as long as possible and then started the onslaught in the second half.

City dropped their intensity in the second interval and invited Liverpool back into the match. After some good work by Alex Oxlade-Chamberlain and Sadio Mane, Mohamed Salah rounded off the keeper to score the much needed away goal by dinking one past Nicolas Otamendi. It was his 39th goal of the season.

Roberto Firmino then added the second in the final quarter and helped Liverpool complete a European double over the Premier League champions-in-the-making. Firmino now has nine Champions League goals to his name, the highest ever tally from a Liverpool player.

The biggest difference between the two sides was their finishing. On one hand, Manchester City dominated possession over the two legs but lacked penetration, whereas Liverpool were clinical with their chances and showed why they are considered one of the best-attacking sides in the world.

If I had made this claim during the group stage, you probably would have had a hearty laugh. But the situation has changed dramatically in a matter of months. Jurgen Klopp’s men have stormed their way into the semis of the Champions League and now possess a serious chance of winning their sixth major European title.

Liverpool put FC Porto to the sword in the round of 16 and have now got the better of Manchester City, “the best team in the world at the moment,” according to Jurgen Klopp. The manner in which the Reds have stormed past their opponents, even showing defensive resilience, is what has caught everyone’s attention.

Liverpool hunt in numbers, regaining possession and completing the transition in a flash. Their forwards have scored 79 goals amongst themselves, which is no mean feat! But the thing that has impressed the most is their defending.

The Reds were under the cosh in the second leg but they never conceded many clear-cut chances to City. Dejan Lovren was solid at the back, the fullbacks never left their markers, and Van Dijk marshalled the entire backline with expertise. Clearance, after clearance was made, through balls were intercepted and shots were blocked/deflected by the diving bodies.

Liverpool look balanced across the pitch, and judging by their masterclass over Manchester City, any team left in the competition will look to avoid facing Klopp’s Liverpool. 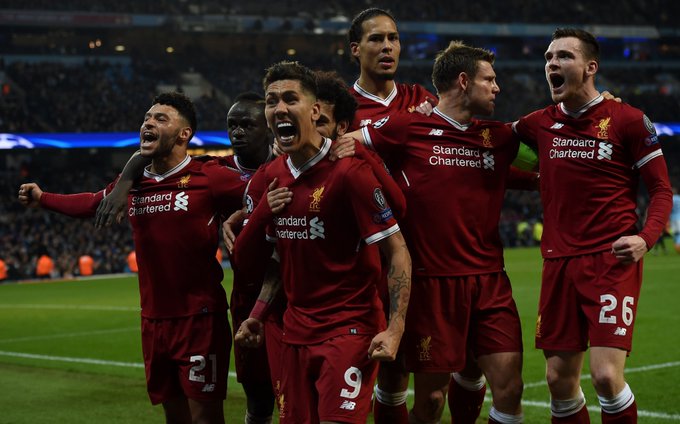 10 – Liverpool have reached the semi-final stage of the European Cup/Champions League for the 10th time – the only English team to have appeared in more are Man Utd (12). Stalwarts.
Loading...
Post Views: 270
Continue Reading
136
Share FacebookTwitterGoogle+ReddItWhatsAppPinterestEmail