Liverpool put up a show of brilliant attacking football as Mohamed Salah tormented his former side with two goals and two assists.

Wow! That is the first reaction everyone must have had at the final whistle. The first leg of the semifinal between Liverpool and AS Roma had everything – goals, drama and an unexpected end to the game. Liverpool plundered five past a hapless Roma defence but conceded two crucial away goals in the space of five minutes.

Mohamed Salah (who else?) gave Liverpool the lead with a stunning curling effort past Alisson and then doubled his tally with a well-timed run and a perfect dink past the keeper. The Egyptian then provided two goals on the platter for his partners in crime – Roberto Firmino and Sadio Mane to make it four on the night. Firmino added the fifth after heading home from a James Milner corner.

It seemed all done and dusted for AS Roma but a mistake from Dejan Lovren allowed Dzeko through on goal who made it 5-1. Roma then received a penalty in the dying stages of the game after Milner’s block was judged as handball. Diego Perotti made no mistake from the spot to give Roma two previous away goals.

A game of this stature and after this astonishing result will surely have a lot to be discussed upon. So without further ado, let’s analyze this match in further detail and dissect the key talking points that emerged from Liverpool’s 5-2 win over AS Roma:

Starting in a 3-4-2-1 formation that stormed past FC Barcelona in the quarterfinals, AS Roma did surprise Liverpool with their start to the game. The Giallorossi pressed Liverpool high up the field and were not giving any time on the ball to Liverpool’s defenders or midfielders to provide the service to the forwards.

The plan was working brilliantly as Jurgen Klopp’s men could not play their natural game until the 25th minute. Until Liverpool created their first real chance of the match (when Sadio Mane skyed a one on one chance), the home team was the second-best side on the field.

But as soon as Liverpool found their footing, AS Roma strangely looked a different unit. The side that was dominating Liverpool at their own game were now looking second best in every 50/50 duel and giving far too much space to none other than Mo Salah.

It resulted in two quickfire goals from Liverpool and set the tone for the rest of the first leg.

When Alex Oxlade-Chamberlain was stretchered off the field in the 16th minute, it was sensed that Liverpool will miss his drive and hunger going forward for the rest of the match. But his replacement, Georginio Wijnaldum stepped up to the plate brilliantly and never put a foot wrong.

James Milner was at his usual industrious best – fighting for lost causes, joining in the attacks and working his socks off to win the ball back. But Jordan Henderson was the pick of the three! The captain delivered a brilliant performance and displayed once again why he is highly rated by the club and country coaches.

Henderson dictated the tempo of the game, won possession back innumerable times and never shied away from doing the dirty work. AS Roma’s midfield of Danielle De Rossi, Radja Nainggolan and Kevin Strootman that had played Barcelona’s famed midfield out of the park had no answers to Liverpool’s midfield three.

#3 AS Roma’s tactics were simply suicidal

You just cannot deploy a high line when facing against THE Liverpool trio of Salah, Firmino and Mane. These lot can hit you on the counter and have done so on innumerable occasions this season. Still, AS Roma and Eusebio Di Francesco opted to play with a high line, giving all the more advantage to Liverpool’s front three.

A high line works for a side that presses high up the pitch and has pacy fullbacks to get back in position when possession is lost. Aleksandar Kolarov and Alessandro Florenzi are the last full back pair to be given this job. Liverpool’s strategy to apply the route one strategy took Roma’s press out of the game and made it easy for the Liverpool forwards to get behind the defence.

The visitors astonishingly did not rectify their mistake in the second half and were punished for their lackadaisical defending by Mohamed Salah and co. Kolarov was horrendous defensively and the same could be said about Juan Jesus who simply had no clue about how to deal with the Egyptian.

AS Roma will have to be better positioned defensively to have any chance of repeating the Barcelona miracle again next week, this time against the Reds.

What can we say about the Egyptian that has not been already said? The man is on fire! This time it was the turn of his former side to face the wrath of football’s latest demi-God. Mohamed Salah was unplayable on the night! Two goals and two assists in a Champions League semifinal is simply brilliant.

His first was one of the goals of the season – curling one past Brazil’s no.1 goalkeeper with that mighty left foot of his. No keeper in the world would have saved that! His second saw him running through on goal and chipping it past Alisson to score two chipped goals in as many European games.

In the second half, Salah showed his selfless nature by delivering two assists and putting the goals on a platter for his teammates. He now has 43 goals and 13 assists in all competitions. These numbers are unheard of for a player not having a Ronaldo or a Messi at the end of his name.

Roma’s tactics made it far too easy for the Egyptian to dominate the proceedings which he did with aplomb. He was strangely taken off in the 75th minute which gave Roma the license to attack with not having to worry about the Egyptian running past them.

Salah’s departure inadvertently helped Roma mount a slight comeback – a decision that must be currently rued by Jurgen Klopp. 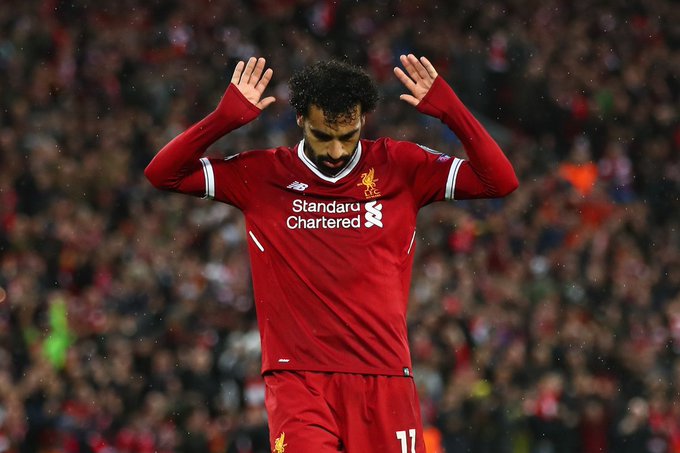 Had it been 5-0 at the end of the final whistle, Liverpool players and fans alike would have already booked their tickets to Kiev. But two late goals have somewhat dampened the mood around to what is a stunning European victory for the Reds.

Scoring five in a Champions League semifinal is unheard of. Liverpool sensed the opportunity in the first half and went for the jugular. Klopp’s men ran riot until the final 10 minutes of the game. But those last ten minutes have given AS Roma a ray of hope.

A belief that they can repeat the Barcelona feat and score three goals in the second leg. The tie that was looking finished when Firmino scored the fifth came alive when Perotti scored Roma’s second. At the final whistle, the away end looked to be in a joyous mood more than the home support.

The Liverpool players know that they have missed a trick by letting Roma crawl back into the game. Virgil Van Dijk was disappointed in his post-match talk. His reaction echoed the opinion of the Liverpool supporters.

This tie is not over! The Giallorossi will now give their all in the second leg to score three more goals and do the unthinkable. As for Liverpool, they just need calm heads in defence and one away goal to seal the deal and enter the Champions League final for the first time in 13 years!

Breaking News: 3 things AS Roma got wrong in 5-2 defeat to Liverpool