‘Watch the best players in world football at the Etihad Stadium,’ a glossy brochure would read.

During that meeting, the name more than one member of staff suggested pencilling in was Messi. 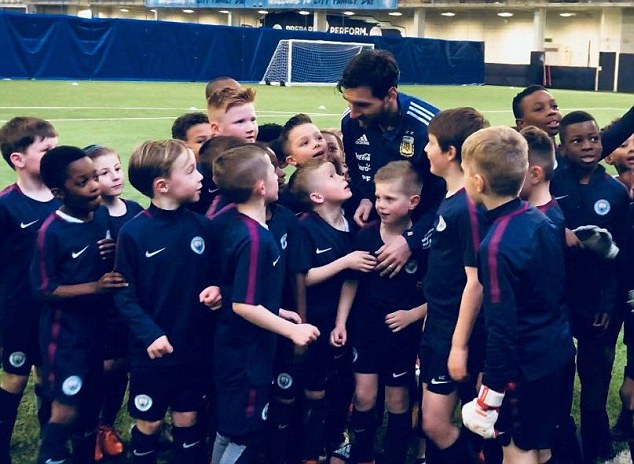 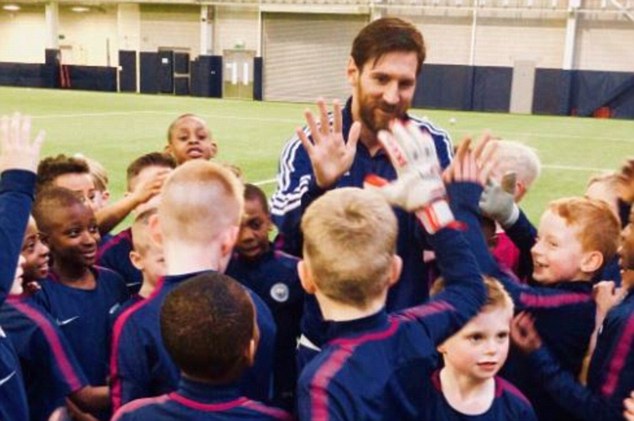 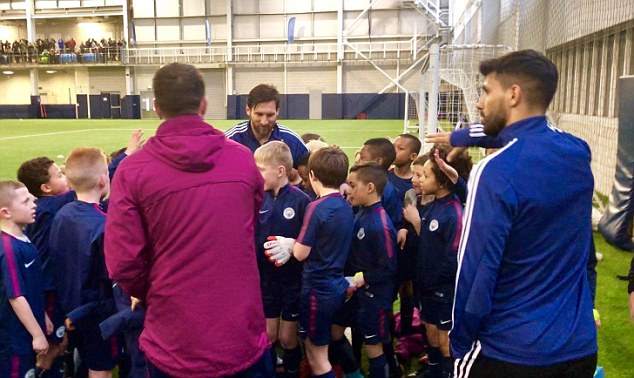 But perhaps that was too hasty. For here he is, in the city and in the City stadium with Argentina as they face Italy on Friday. Here with his great mate, Sergio Aguero.

The pair are inseparable when their paths cross — Messi puts Aguero up when he visits Catalonia — and that has been no different over the last three days. Messi arrived at lunchtime on Tuesday but Guardiola has not been around.

Coincidentally, he is in Argentina. He wanted to be away from the circus, the evidence of which stands at the gates of the Premier League leaders’ training ground, the City Football Academy. 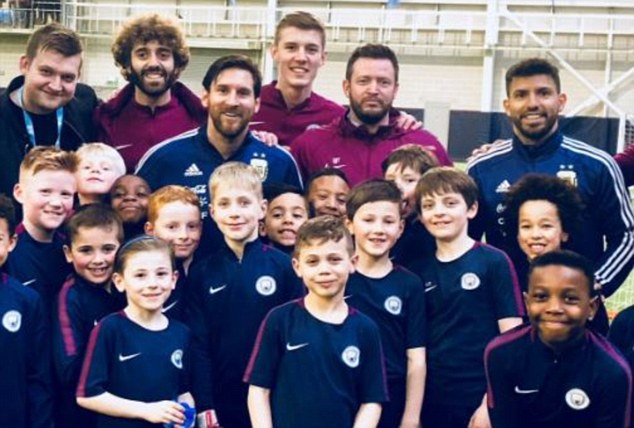 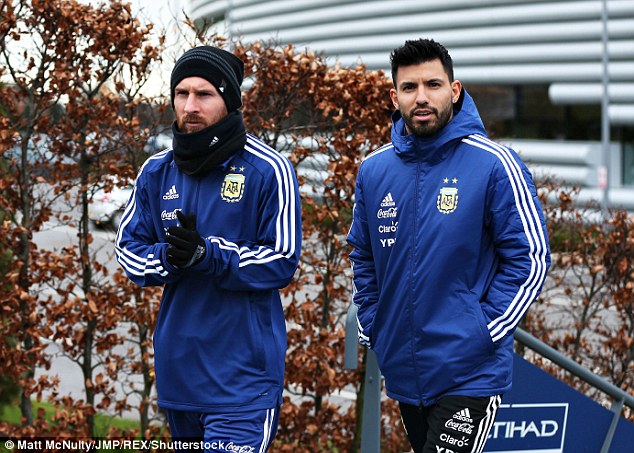 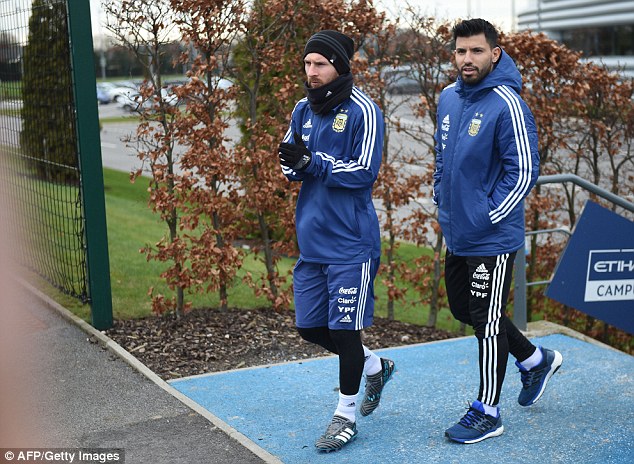 Sergio Aguero could be left in Manchester as Argentina travel to face Spain next week.

The Manchester City striker has a knee injury ahead of Friday’s friendly with Italy at the Etihad. ‘He’ll probably sit out the first game,’ said Argentina boss Jorge Sampaoli.

‘If there is a substantial improvement he could travel to Madrid to play against Spain, but I see it difficult because of the little time left.’

Staff have remarked at South American media and fans hanging around the wrong entrance trying to steal a glimpse of Messi. He has not been allowed to roam Manchester in any case, Jorge Sampaoli’s squad staying at the Academy for their entire stay so far.

They have hired the complex’s hotel with en-suite rooms, described by one source as an ‘upmarket Premier Inn’.

Only on Friday, after the friendly, will Argentina move to Jose Mourinho’s semi-permanent abode, the Lowry Hotel. Why Manchester? Because, according to the organisers, this is a city which ‘best represents football around the world’.

Marry that with City chief executive Ferran Soriano’s claims that only 10 per cent of television audiences who watch Barcelona’s Champions League games are Spanish — a statistic he says is down to Messi’s global reach — and you have the real answer why the world’s finest has pitched up. These are serious times for Argentina and their captain. 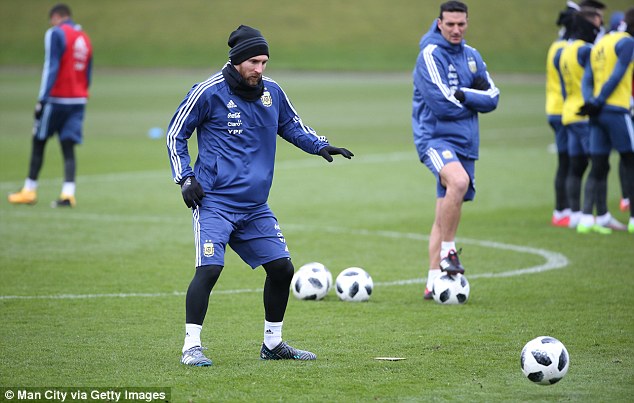 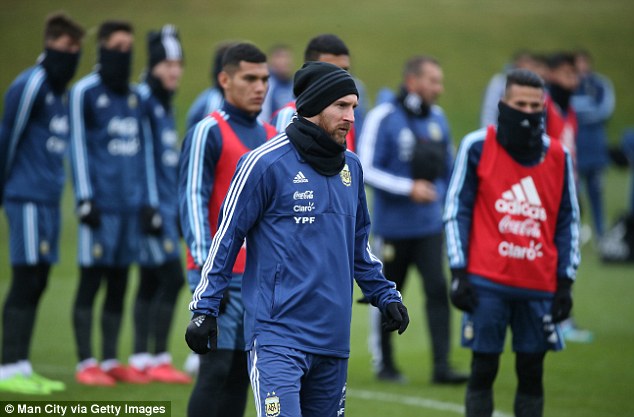 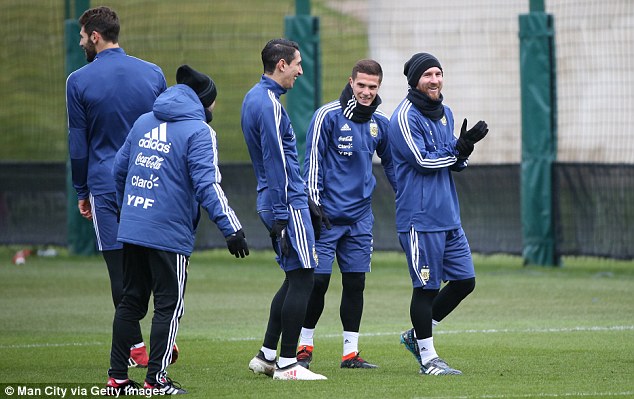 Messi, who wept after defeats in two Copa America finals and following the same fate at the 2014 World Cup, admits Russia could be the last shot at glory.

That the team are cooped up, solely focused on the final few training sessions before June, is hardly surprising.

Typically, Aguero is ruling the roost. The CFA is his house, as Guardiola knows only too well, and you sense the striker is enjoying this week, making a point of grinning and waving to one employee in a red Ford Fiesta as she allowed him to dawdle over a crossing to the training pitches alongside Messi.

Four members of City’s academy staff were stopped from watching that particular session at the pitch perimeter. They trudged back to the inside dome before coaching the club’s Under 8s team, who would later encounter a special visitor.

Aguero, always friendly anyway, noticed them and wandered in with his great mate, to open mouths. Messi briefly chatted away with staff while high-fiving the kids.

He posed for a group shot as parents watched on in wonder from a raised platform. The starstruck children were still ‘buzzing’ as they left. One parent said their young son woke up on Thursday having dreamt of saving Messi shots. 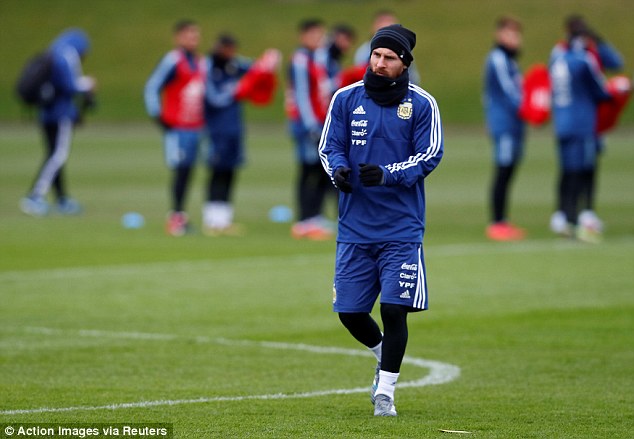 Messi has been approachable with friends and family of players who regularly come and go inside the training ground, stopping to say hello and shaking hands. Those who know him well say Messi’s character has changed markedly over recent months. Luis Suarez is said to have had an influence on that in Barcelona, with both living in the Bellamar neighbourhood along the Catalan coast.

Their wives have gone into business together, Messi has a share in Suarez’s steakhouse and he has become more open. He is still relatively quiet but now owns a greater sense of belonging inside the Argentina camp.

Great significance was placed on Messi standing on a stool and leading the dressing room chanting after his hat-trick against Ecudaor in October secured Argentina’s passage to the World Cup. It was described as his Maradona moment and he is being viewed in a different light by the general public.

‘This is going to be his team,’ said Sampaoli. ‘He is the best of all and is in a stage of maturity that can he can carry the team on his shoulders.’ 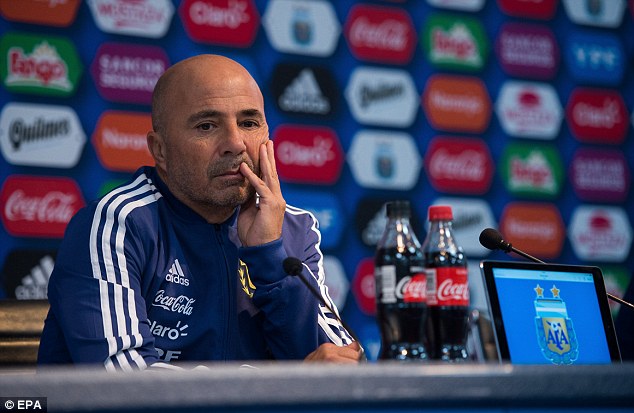 Messi is not exempt from Aguero’s house rules though. Players are told to clean up after themselves inside the first-team building. Plates are cleared, the canteen uncluttered.

That is where Messi tucks into his diet devised by Italian doctor Giuliano Poser, whom he met in 2014 on the advice of former City defender Martin Demichelis. Poser, who has also advised Aguero, told the forward to eat almost no red meat, no sugar and to cut carbohydrates. The gluten-free menu is in moderation, with small portions often, and based heavily on olive oil with emphasis on fish and eggs.

Another dietician credited with helping Messi, Silvia Tremoleda, is in Guardiola’s backroom team.

The worlds of Manchester City and Messi collide so regularly that facilitating a switch would be easy if the 30-year-old did want to move. Alas, Guardiola has constantly claimed he should retire at Barca.

Breaking news: Manchester City title stroll should not distract from strength of competition