Breaking News: He’d win an award for getting out of his car – Klopp jokes about Salah prizes

Mohamed Salah could win an award for getting out of his car, Liverpool manager Jurgen Klopp joked.

Liverpool manager Jurgen Klopp joked he thought star forward Mohamed Salah would win an award for simply getting out of his car.

Salah set a record for the most goals in a 38-game Premier League season, scoring his 32nd in a 4-0 thrashing of Brighton and Hove Albion on Sunday.

The Egypt international claimed the Golden Boot, adding to numerous individual honours he has already won this season, including the PFA Players’ Player of the Year and FWA Footballer of the Year.

Klopp suggested Salah – who has scored 44 goals in all competitions this season –could be given an award for just getting out of his car.

“We all can imagine how it would be if everybody said you are brilliant every day,” he said.

“They don’t only say you’re brilliant, they give an Oscar, and an award for this, award for that.

“I thought he’d get an award for getting out the car without an accident or without struggling. So it’s really difficult to stay focused, and he is focused.” 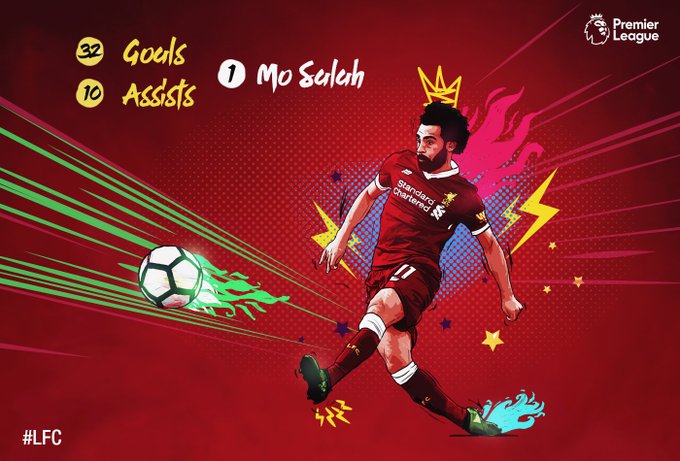 Klopp’s team secured a top-four Premier League finish with their win on Sunday, and they complete their campaign in the Champions League final against Real Madrid on May 26.

While the German praised Salah for his season, he believes the 25-year-old can get even better.

“He played this season, which was outstanding, but he’s young enough, and has enough potential to improve still. That’s really good news, for all of us and him as well,” Klopp said.

“So there’s still work to do, and I’m really happy about that. But what he is, in his mind, is a real goal-getter. That’s cool. He wants to, and there’ll be goals again.

“That number, I have no idea of course, because it’s difficult to score that many goals otherwise other people would’ve done it.

“Of course he gets an award for Golden Boot, right? Cool, then he has two weeks to prepare for our biggest game so far, that’s for sure.”

Wanted Kidnapper Who Shoots With 2 AK-47 Guns At The Same Time, Arrested. Photos

President Trump says he’s working with China to save ZTE