A jarring demonstration of the difference between the Chelsea of last season and this came shortly after the half hour in an opening 45 minutes of fruitless dominance against Southampton in the FA Cup semi-final at Wembley.

At this stadium last May, Chelsea were reduced to 10 men but equalised against Arsenal in the final. Diego Costa sent an opportunistic strike spinning past David Ospina and, even though he had no involvement, David Luiz charged into the goal after the ball and shook the netting around in a celebratory fury.

Of course, Antonio Conte’s men went on to lose 2-1 and it was the last we ever saw of Costa’s simmering malevolence in a Chelsea shirt. Things have never been quite the same ever since.

In the 33rd minute on a scorching Sunday afternoon in the capital, Willian spotted Cesar Azpilicueta’s clever near-post run and the Spain defender glanced on a deft header. The Southampton defenders stood motionless waiting for a finishing touch that never came. No Chelsea player shaking the netting, no-one in blue even close enough to consider it.

Conte’s men got there in the end – Olivier Giroud doing a passable impression of Costa’s tenacity as Southampton emerged in body but not mind for the second half to set in motion a 2-0 victory – but where a sleek winning machine was once enviably well oiled, it too often clunks and splutters at inopportune moments.

Eden Hazard is the usual exception. The Belgium star illuminated an otherwise forgettable first half with flashes of his balletic brilliance, a fleeting reminder of happier times for Conte as he becomes the latest Chelsea boss apparently bound for a truncated tenure.

A sharp sixth-minute one-two with Giroud was followed by an impish spin away from Mario Lemina before Hazard scythed a statement of intent from 20 yards just over.

He strode forward majestically to tee up Willian for a rasping left-footed shot against the crossbar, the closest Chelsea came before the break.

If offering Hazard that much space was ill-advised, Southampton had little joy at close quarters either when faced with the effervescent playmaker.

In a tight spot on the left flank, he spun into space to pick out Cesc Fabregas and darted through the bodies on to a return pass. The cutback from the byline had a little too much heat for Giroud.

But any striker operating in front of Hazard in this mood knows the assist will surely come. It did 27 seconds after half-time. Chelsea’s number 10 brought down a raking pass to wobble a disorganised Southampton defence. Using a combination of determination, composure and nimble footwork, Giroud scattered all around him like bowling pins to prod into an unguarded net. 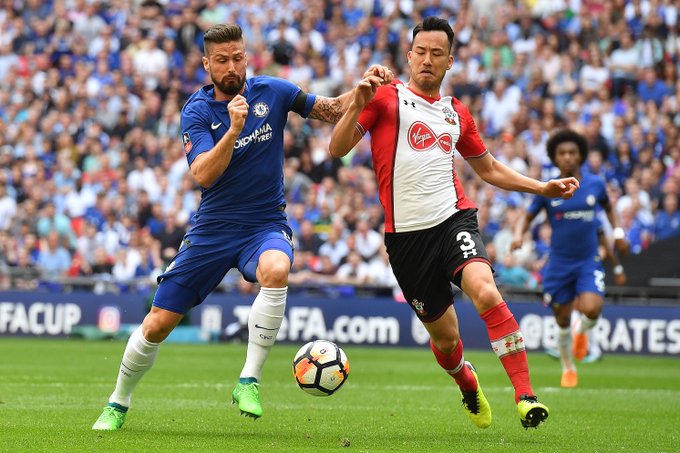 Repeating a 2018 theme, Chelsea were unable to pull decisively clear – Hazard curling just wide on the break and forcing Saints goalkeeper Alex McCarthy to push over either side of an audacious “rabona” cross – and endured an anxious moment or two before Giroud’s replacement, the much-maligned Alvaro Morata, nodded them into a final date against Manchester United.

That showdown against bitter rival Jose Mourinho will be a fitting conclusion to a campaign that has felt like one prolonged argument from Conte. The sight of Chelsea burning through another manager also seems a terrible waste.

Last term, Conte caught an all-star coaching cast of Mourinho, Pep Guardiola, Jurgen Klopp and Mauricio Pochettino cold. Now, that quartet are a year further into their work having made evident progress while Chelsea and Conte are wandering headlong into a state of flux.

The club will do well to appoint a successor as talented as the former Italy and Juventus boss while, with Thomas Tuchel reportedly cosying up to Paris Saint-Germain and Zinedine Zidane’s latest European assault likely to spare him at Real Madrid, what better job can Conte walk into? Does going over old ground with the Azzurri really appeal?

Too much has probably been said and done by this point to pull back from the brink but there are worse ways for Antonio Conte to spend his time than enjoying the gift of Hazard’s artistry and helming another title assault.