Kevin De Bruyne may be stealing the headlines in the Premier League, but fans feel Eden Hazard was better for Belgium in 2017.

Chelsea’s Eden Hazard has beaten Manchester City star Kevin De Bruyne to the Devil of the Year award for his performances for Belgium in 2017.

De Bruyne has played a starring role for the Premier League’s runaway leaders this season, scoring six goals and setting up another nine in 21 games, but Belgium fans believe Hazard enjoyed the better year on the international stage, as they cruised to World Cup qualification.

Hazard only made five appearances for Belgium in 2017, as opposed to De Bruyne’s eight, though the Chelsea star produced several fine performances, scoring three and assisting two in those games.

His outstanding displays saw him claim 10,280 votes, more than double the 4,710 that De Bruyne amassed, with Romelu Lukaku rounding off the top three with 3,223 entries. 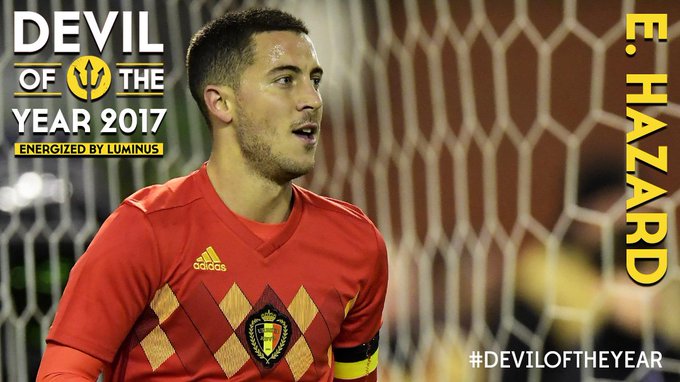 Breaking news: I only spoke with him twice – De Bruyne on time under Mourinho

Lionel Messi: When Cristiano Leveled Me, I Have To Admit That It Hurt Me A Lot

FULL LIST: Messi And Other Winners At 2021 Ballon d’Or Awards