After a winner against Liverpool boosted Chelsea’s Champions League hopes, striker Olivier Giroud says he wants to be a lucky charm.

Sunday’s 1-0 Premier League win at home to Liverpool – secured thanks to a trademark Giroud header – moved fifth-placed Chelsea two points outside the top four with a pair of fixtures remaining.

Giroud’s solo strike also booked a place in the FA Cup final for Chelsea and the France forward hopes his experience of last-gasp Champions League qualification at Arsenal will be useful for his new team.

“I hope I can be the lucky charm for the Champions League race in the final sprint,” said Giroud, who signed for Chelsea in January.

“We don’t have this situation in our hands, but I have experience about these kind of end of season situations.

“We need to give everything and wait for the other results. I’m confident because if we play with that kind of mentality we can have nice things.” 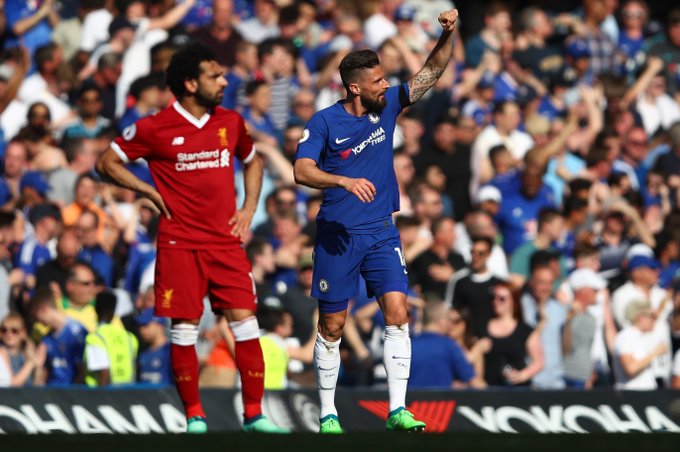 Giroud was initially used primarily as a substitute by Conte but has forced his way into the Italian’s plans with Alvaro Morata struggling for form and fitness.

“I have received a really warm welcome at the club from when I first arrived,” Giroud added. “And I felt like I was at home since I came here, like I’ve been here a few years, so for me it was very important.

“I think when you give everything on the pitch people see that and even more when you have the opportunity to be efficient and to bring a plus to the team. I think it’s a nice comeback from the fans.”

Drama between Teddy A and his babymama over Bambam? Here’s the gist….