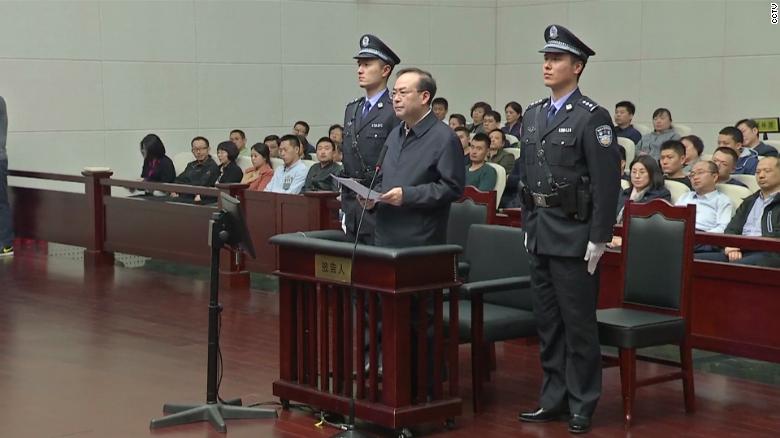 Beijing (CNN) Sun Zhengcai, a former top Chinese Communist Party official once considered a potential successor to President Xi Jinping, has been sentenced to life in prison after being convicted of taking bribes.

Sun, a former Communist party chief of the sprawling Chongqing municipality, told a court in northern China Tuesday that he will accept the ruling and would not appeal it, according to state media.
“I sincerely admit my guilt and regret my crime,” Sun was seen telling the First Intermediate People’s Court of Tianjin on national broadcaster CCTV.
“I will seriously reform myself,” he said and bowed.
Last month, Sun admitted to accepting more than 170 million yuan ($27 million) between 2002 and 2017, in both property and cash, when he held various posts across China.
Sun, 54, was a former member of the ruling Communist Party’s Politburo — China’s top decision-making body — and considered a future leader at the time of his downfall.
When he first came under investigation by the party’s disciplinary arm in July, the move was seen as an example of Xi further consolidating power ahead of a major party congress.
Since taking power in 2012, Xi has promoted a massive campaign as a way to stamp out corruption throughout China. More than 1 million officials have been brought down since it began.
But analysts say the Chinese President, considered the country’s most powerful leader in years, has used the crackdown to eliminate some of his rivals.
Chongqing, one of China’s largest cities, is situated deep in the country’s economic heartland and far from the political center of Beijing.
Sun was put in charge of Chongqing in 2012 after former party Secretary Bo Xilai was jailed for life for corruption in a scandal involving the murder of a British businessman.
Sun was replaced by Xi protege Chen Min’er, a rising political star who joined the 25-member Politburo last year.
Loading...
Post Views: 341
Continue Reading
BeijingPresident Xi JinpingsuccessorSun Zhengcai
167
Share FacebookTwitterGoogle+ReddItWhatsAppPinterestEmail