KABUL, Afghanistan — Flattery of the American president may work in North Korea and Washington, but in Afghanistan it is proving dangerous and even fatal.

An Afghan man who admired the president so much that he legally named his son Donald Trump has now said he no longer feels safe and has fled Afghanistan.

That came three days after another Afghan who helped organize the minting of a gold medal thanking President Trump for his support of Afghanistan was killed by the Taliban, according to police officials in Logar Province and to the insurgents themselves. A third Afghan, also involved in making the medal, said he, too, would flee the country because he no longer felt safe.

Zabihullah Mujahid, the spokesman for the Taliban, said in a statement on WhatsApp that the insurgents were responsible for the killing of Gul Nabi in Pul-e-Alam, the capital of Logar Province, in revenge for his “criminal” role in making the medal. Shapoor Ahmadzai, a spokesman for the Logar Provincial Police, said Mr. Nabi, a prominent tribal elder in the province, had been killed by a bomb attached to the underside of his car last Friday.

On his Twitter account, Mr. Mujahid posted a photograph of Mr. Nabi along with a statement that he had been killed. 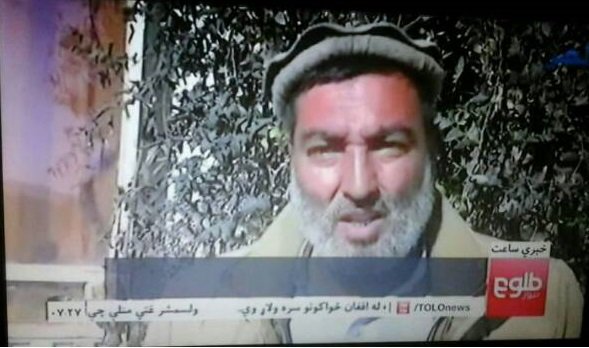 In January, Mr. Nabi and his friend Farhad Akbari, an Afghan Local Police commander in Logar, raised funds to create a medal out of gold to thank Mr. Trump for taking a critical stance against Pakistan, something many Afghans have long demanded, blaming that country for providing safe havens to the Taliban.

The Afghan Local Police are a lightly trained, pro-government militia force. Logar Province, which is a short distance south of the capital, has been heavily contested by the Taliban for years.

“Now the U.S. president recognizes that Pakistan plays a double game and he cut aid to Pakistan,” Mr. Akbari, 38, said in an interview in January. “We sent him that medal to show our unity and our appreciation.”

The two men raised about $640 to buy the gold, mostly using small contributions from Logar residents, they said. It was inscribed, in Persian, “This Bravery Medal is from the Afghan people to Donald Trump, President of the United States of America,” and the men said they presented it to the American Embassy in Kabul.

Reached on Sunday, Mr. Akbari said he was planning to flee to India because of the attack on Mr. Nabi. “I don’t want to get killed like my friend, Hajji Gul Nabi,” he said. “My life is under threat.”

Assadullah Poya, the man who named his son Donald Trump when he was born in 2016, was reached Monday through Facebook Messenger and said that the killing of Mr. Nabi had frightened him as well.

“After seeing the reaction regarding my son’s name, and also the Taliban-directed assassination of the guy who awarded President Trump a medal, I don’t feel safe,” Mr. Poya said. “The lives of me and my family members are at risk, and I’m asking for protection.”

Reached later, Mr. Poya said he had fled Afghanistan and gone into hiding with his family because of the Taliban killing.

Mr. Poya said that his decision to name his son after the American president had already caused him to lose his job working for a refugee agency, and that he was unable to send his older children to school. He had also relocated to Kabul, the capital, from his home in remote Daikundi Province.

Mr. Akbari said he now regretted the decision to make a medal for Mr. Trump because those involved had received no support from the authorities or the American government.

“We thought the U.S. is a superpower and values friendship, but they don’t,” he added.

The American Embassy in Kabul did not immediately reply to requests for comment on the episodes.