Donald Trump spent far less on his presidential campaign than Hillary Clinton did, but the eye-popping money surrounding his inauguration weekend raises a few questions. The president’s inaugural committee, which is supposed to be a nonprofit organization, brought in $107 million in donations and used nearly all of it, far exceeding the money spent by Barack Obama in 2009 ($55 million) and in 2013 ($43 million). As has been revealed across several reports stemming from the release of the Trump Inaugural Committee’s tax return, the excess of funds may have been used for more than just trying and failing to convince Paul Anka to perform “My Way” at the Inaugural Ball.

Interest in the inauguration money was reinvigorated last Friday, when ABC News revealed that Special Counsel Robert Mueller is investigating foreign donations to Trump’s inaugural fund, particularly those coming from individuals with ties to Russia, Saudi Arabia, the United Arab Emirates and Qatar. Those questioned by investigators – including billionaire Thomas Barrack, who chaired the inaugural committee – were reportedly asked about specific donors, including Andrew Intrater, the CEO of Columbus Nova, one of the companies that paid Michael Cohen’s LLC for “consulting” advice in 2017. Columbus Nova is an affiliate of a larger company owned by Intrater’s cousin, Viktor Vekselberg, a Russian oligarch with close ties to Vladimir Putin. Intrater donated $250,000 to Trump’s inauguration, and both he and Vekselberg were in attendance, as were several other figures with close ties to Russia.

On Monday, MSNBC’s Ari Melber discussed the news with Steve Kerrigan, the president and CEO of Obama’s 2013 inaugural committee. Kerrigan explained that because, unlike with campaign finances, there is very little oversight of inaugural funds, the committee could have been used to funnel money. “They either totally mismanaged the $107 million they raised, or they treated it as it can be treated because of the loose transparency requirements around it: as an opportunity to have a slush fund,” Kerrigan explained.

Greg Jenkins, who oversaw George W. Bush’s 2005 inaugural committee, was similarly perplexed about how Trump’s committee could have spent $107 million on inaugural events. “It’s inexplicable to me,” he told ProPublica. “I literally don’t know. They had a third of the staff and a quarter of the events and they raise at least twice as much as we did. So there’s the obvious question: Where did it go? I don’t know.”

Concerns over how the committee’s money was used began to gain traction in the summer of 2017, and after the tax return was filed in February, the New York Times reported that the majority of the $107 million was used for overinflated administrative expenses, as well as to pay four separate event-planning firms. One of those firms, WIS Media Partners, was created only six weeks prior to the inauguration by Stephanie Winston Wolkoff, a close friend of Melania Trump. The firm received close to $26 million from the inaugural committee, and questions have been raised as to how exactly that money was allocated. Craig Holman of the watchdog group Public Citizen, which has investigated how the committee spent its money, told the Times that the committee’s use of the donations represented “fiscal mismanagement at its worst.”

The plot thickened on Monday, when the Center for Responsive Politics reported that $1 million of the money gifted to the inaugural committee came from conservative legal activists who have since wielded influence over the Trump administration’s process for nominating federal judges. The donation came via a Virginia company called BH Group, LLC, which appears to have been established solely to mask the real source of the money. In addition to their influence over federal judgeships, those connected to the payment were involved in the effort to stall Obama’s nomination of Merrick Garland to the Supreme Court, as well as the introduction of Trump to Neil Gorsuch, who was sworn in as a Supreme Court justice last April. 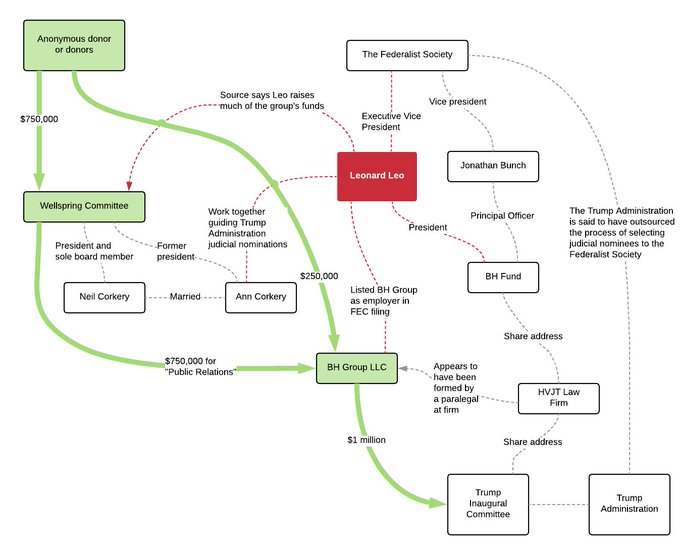 NEW: Trump’s inauguration received a $1 million donation that remains completely anonymous. Today, we can at least definitively say that an executive VP at the Federalist Society had a key role in orchestrating the contribution https://www.opensecrets.org/news/2018/05/mystery-gift-to-trump-inauguration-from-conservative-activists/?utm_source=twitter&utm_medium=social&utm_campaign=twit-mystery-gift-to-trump-inauguration%2F051418 …

Along with ProPublica, the Center for Responsive Politics found that the sources of several other donations were similarly obfuscated, as well as that two members of the inaugural committee have been convicted of financial crimes, and that the committee’s treasurer was reportedly a co-conspirator in an accounting fraud case. Trump’s inaugural committee appears to be the first that has been willing to accept donations from dark money groups. In other words, it took full advantage of the lack of transparency referred to by Kerrigan.

It’s impossible to know the extent to which influence was peddled and donations were potentially rerouted into the pockets of figures close to Trump. When Trump Inaugural Committee Chairman Thomas Barrack was asked in 2017 what would become of the millions of dollars that was sure to be left over after the cost of the inauguration was taken care of, he insisted that it would be given to charity.