FC Barcelona wrapped up their 25th La Liga title in fine fashion against the Galicians. Fittingly, Lionel Messi scored a hat-trick for Barcelona in a pulsating game against Deportivo who were relegated with this 4-2 defeat.

Coutinho opened the scoring for the visitors and Leo Messi doubled it after a stunning outside of the boot assist from Luis Suarez. It all pointed to a routine victory for the Catalans but Deportivo were not going without a fight.

Lucas Perez halved the deficit before half-time while Emre Colak equalized for Deportivo in the 64th minute. The hosts were in search of a winner to keep their slender survival hopes alive but Messi had other ideas.

Combining brilliantly with Luis Suarez, he scored two quickfire goals in three minutes to win the game and also nab a well-deserved hat-trick in a title-clinching encounter. On that note, here are the five talking points that emerged from Barcelona’s hard-fought 4-2 win over Deportivo La Coruna:

Ernesto Valverde deployed all four of his big name attackers against Deportivo. Lionel Messi and Luis Suarez were joined by Philippe Coutinho and Ousmane Dembele on the flanks. The two new signings worth over €300 million started together just for the seventh time this season.

The duo combined beautifully in the first half and were a constant threat to the Deportivo defence. It was Dembele who found Coutinho with a neat pass for the first goal which was expertly finished by the Brazilian. This was Dembele’s sixth assist of the season – providing two assists each to the other three.

All four attackers were fluid in their movement and looked threatening every time with the ball at their feet. Though the quartet could not repeat their first-half antics after the interval, the first 45 minutes gave a peep into Barcelona’s attack in the near future.

Though the Barcelona forwards were a treat to watch, their defence was a different story. Deportivo needed a win to stay alive in the league which meant that they had to attack. They did so, brilliantly, at times, getting past the Barcelona defenders rather easily.

Before Lucas Perez scored Deportivo’s first goal of the night, they had a number of other chances to grab a goal. Borja Valle first shot wide from close range while Fabian Schar missed a sitter. The Barcelona defenders were playing with fire at times and they suffered when Perez brought Deportivo back into the game.

Emre Colak then scored the equalizer and the mood suddenly changed around the Riazor. Barcelona were under the cosh after Deportivo’s second goal with the hosts using the right flank for the majority of their attacks.

Jordi Alba did his best Marcelo impression on the night of being wanting defensively which was used to their advantage by Deportivo. Fortunately for Barcelona, Deportivo could not score again despite their constant efforts.

#3 Deportivo show courage on their D-Day

It has been a disappointing season for the Galicians. Losing 18 games before coming into this one, Deportivo have performed below par for almost the entirety of the season. They needed a win against FC Barcelona to have a minute chance of survival.

Deportivo have shown progress in the last few weeks under new manager Clarence Seedorf. They were unbeaten in their last four league games before the Barcelona encounter. And the newfound confidence was evident against Barcelona who were taken aback by Deportivo’s prowess going forward.

They scored two against an underperforming Barcelona defence and could have added another at the end. But they were up against a certain Lionel Messi who scored two goals right at the end which must have felt like two uppercuts to the face for the home side.

Deportivo La Coruna are now relegated to the second division along with Las Palmas and Malaga. But with the burden of survival now off their head, expect the Galicians to play an attacking brand of football in their remaining matches.

Lionel Messi scored a brilliant treble of goals to take his league tally to 32 in the season, one ahead of Liverpool’s Mohamed Salah. The Argentine has now scored 30+ league goals on seven occasions which is a La Liga record. 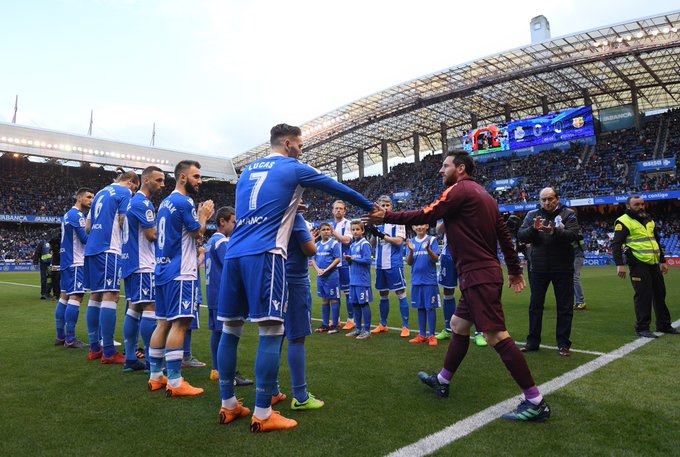 But for this hat-trick, Messi cannot be praised alone. It was Luis Suarez who assisted all three of Messi’s goals on the night. The two share a telepathic bond in front of goal which was again evident at the Riazor.

For Messi’s first, Suarez found him with a delightful through ball which was then volleyed home by the forward. Suarez then showed unselfishness to set up Messi’s second and then played him through on goal for his third and Barcelona’s fourth.

The duo has scored 55 league goals between them this season. A tally more than that what has been managed by 15 La Liga sides. The striking duo were too hot to handle for Deportivo who combined absolutely brilliantly to take their side home.

Courtesy of a Lionel Messi hat-trick, FC Barcelona clinched the league title with four games to spare and WITHOUT a single defeat so far. It is Barcelona’s 25th La Liga title and astonishingly, their seventh league win in the last 10 years.

After Neymar’s move to PSG and the subsequent heavy loss to Real Madrid in the Super Cup, no one had predicted Barcelona to go on and win this one, let alone go unbeaten in 34 league games!

Ernesto Valverde’s men can go unbeaten this season and write their name in the history books forever. This league win will also be special for Andres Iniesta who is leaving his childhood club this summer. It is the ninth league triumph of his career.

Playing a 4-4-2 formation, devoid of any rotation, Ernesto Valverde concentrated on the league campaign which has paid him dividends. Barcelona have romped their way to a double this season, continuing their trend of domestic domination.