Danica Patrick is interviewed following her release from the infield hospital at the Indianapolis 500. Her race – and career – ended with a crash. Photograph: Darron Cummings/AP

Danica Patrick’s racing career ended with a wreck in turn two at the track that made her famous. Patrick had been running near the middle of the pack in the Indianapolis 500 when she lost control, slid hard into the outside wall, then caromed across the track and hit the inside barrier before coming to a stop on the infield grass in lap 68 of 200.

Patrick, who shot to prominence by finishing fourth as a rookie in 2005, announced earlier this year that she would step away from racing after Sunday’s race. It was supposed to triumphantly cap her “Danica Double,” which began at the Daytona 500, where she also crashed out well short of the finish. 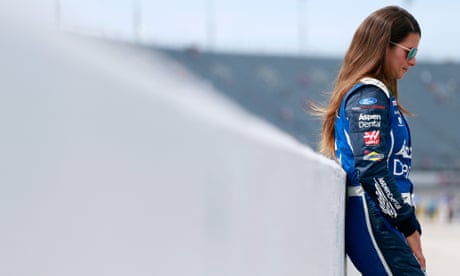 The race was won by Will Power, giving the 37-year-old Australian his biggest victory on IndyCar’s grandest stage. Power took the lead with four laps to go when Oriol Servia and Jack Harvey had to pit for fuel. Power then held off pole-setter Ed Carpenter over the final few laps for the victory.

It gave team owner Roger Penske a 17th win in the Indy 500 and it was Power’s second straight victory this season. He won the road-course event at Indy earlier this month.

Patrick, meanwhile, has been a polarizing figure in racing, and that increased exponentially when she moved from IndyCar to Nascar. She struggled to run up front despite driving for a powerhouse Stewart-Haas Racing team much of her career, and she wound up with just seven top-10 finishes in five full seasons. Still, she is respected and in some cases revered at Indianapolis, where fans still remember her leading the 2009 race before finishing third. She was surrounded by autograph-seekers all month, and she got one of the loudest ovations during driver introductions Sunday.

“I was definitely nervous,” she said, “but I found myself most of the time on the grid feeling confused. ‘What part of pre-race are we in? I don’t remember this. Where are the taps? When is the anthem?’ But I had a lot of my people around me so I was in good spirits.”

Patrick said earlier this week she had no regrets about her career, and that she doesn’t think she will have the itch to come back. Instead, she plans to spend time on her burgeoning business empire and with her boyfriend, Green Bay Packers quarterback Aaron Rodgers.

“Definitely not a great ending,” she said, “but I kind of said before I came here that I feel like if it’s a complete disaster – complete, as in not in the ballpark at all, and look silly – then people might remember that. And if I win, people will remember that. But probably anything in between might just be a little part of a big story, so I kind of feel like that’s how it is.”