Maurizio Sarri’s Chelsea came back from a goal down to register a convincing 4-1 win over newly promoted Cardiff City at Stamford Bridge earlier today. The Blues waited patiently to weather the storm in the early minutes as Neil Warnock’s men conjured a compulsive start to the game in west London.

Cardiff looked sharp early on and Chelsea’s nervy start to the game resulted in the Bluebirds taking the obvious route to break the deadlock. Sean Morrison leapt highest to guide a header on to the path of Sol Bamba, who sneaked in behind Jorginho, to pounce on the ball at the end of a well-worked set-piece routine.

The visitors were able to establish an early lead but Chelsea got back to their stride very soon and it took two stunning saves from Neil Etheridge to prevent Mateo Kovacic from restoring parity between the two sides.

However, Eden Hazard’s magical brace within the space of seven minutes, towards the end of the first half, ensured that the Blues headed into the break with the lead.

Chelsea settled in well during the second half and took control of proceedings before Willian was brought down in the penalty area by Bamba shortly after the Brazilian’s introduction in place of Pedro. Hazard stepped up and sent Etheridge the wrong way to extend the hosts’ lead before Willian put the icing on the cake with a thunderous effort that found the top corner of the net, just three minutes later.

The win helped Chelsea maintain their flawless start to the season while also catapulting them to the summit of the league table over Liverpool, who beat Tottenham Hotspur earlier in the day, on goal difference. On that note, let’s take a closer look at the best and worst performers from the Premier League clash at Stamford Bridge:

The Brazilian was replaced by Pedro, who made his 100th appearance for Chelsea across all competitions, in the starting eleven against Cardiff and it did not take him long to make an impact on the game following his introduction in the second half. The 30-year-old replaced Pedro in the 68th minute and was warranted with mixed reactions due to his sloppy start that saw him give the ball away a number of times after coming on.

However, Willian made the daring run that tempted Bamba to commit a silly challenge that won Chelsea the penalty in the 80th minute and backed up his credentials with a sumptuous finish, that left Etheridge rooted to his spot, just three minutes later.

Pedro’s wasteful nature on the night coupled with Willian’s heroics could tempt Maurizio Sarri to give the Brazilian an extended run in the starting lineup as Chelsea prepare for a busy schedule across three different competitions this month.

The Croatian has almost effortlessly walked into the starting lineup at Chelsea since his arrival from Real Madrid earlier in the summer but Kovacic struggled to make an impact against Cardiff. The midfielder could have done better than the two shots he mustered while going one-on-one against Etheridge in the first half but credit to the goalkeeper, who was equal to the task and pulled the rabbit out of the hat with two massive blocks.

In all honesty, Kovacic did not hit top gear and was far from his usual self of menacing tenacity and guile in the middle of the park. It almost seemed like he did not recover at all from the 6-0 drubbing at the hands of Spain during the international break and picked up a knock that rubbed salt into his wounds.

Kovacic tried to shake it off and carry on with it when he came out in the second half but soon he was unable to keep going before eventually getting replaced by Ross Barkley shortly after the restart, to cap off a disappointing outing.

The Frenchman made his first ever start under Maurizio Sarri against Cardiff and made it a point to stake a claim as the first-choice striker at Stamford Bridge. Olivier Giroud was instrumental for the Blues during the outing and was excellent in bringing his teammates around him into the game.

The 31-year-old played a crucial role in the build-up to Eden Hazard’s first two goals and struck a flawless partnership with the Belgian that proved too much to handle for the visitors. Giroud was pivotal to whatever Chelsea tried to do with the ball and stood up brilliantly to the physicality on offer from Sean Morrison and Sol Bamba during the entirety of the game.

France’s World Cup-winning striker is yet to open his account for Chelsea this year but he has registered a number of assists so far, making breakthrough contributions against Newcastle, Bournemouth and now Cardiff. Giroud’s performance certainly calls for more involvement and Alvaro Morata’s playing time could be under jeopardy from now on.

Harry Arter looked glaringly off the pace and struggled to deal with the swift movement of the Chelsea players under Maurizio Sarri’s free-flowing system. The midfielder struggled to keep the ball at his feet and had to resort to petty fouls as he failed to effectively intercept and break up play in midfield for the visitors.

The 28-year-old hardly stood out positively on the pitch and rarely caused any threat whatsoever to the hosts on what turned out to be a forgetful afternoon for the player. Arter picked up a minor injury towards the end of the first half and never returned after the half-time break to throw further shade at his performance against Chelsea.

We’re quite comprehensively running out of superlatives to do justice to Eden Hazard’s abilities with a ball at his feet with every passing week and the performance against Cardiff proved to be a testament to the very same. The Belgian registered only his second hat-trick in a Chelsea shirt with an all-round display that single-handedly coasted the Blues to comfort zone. 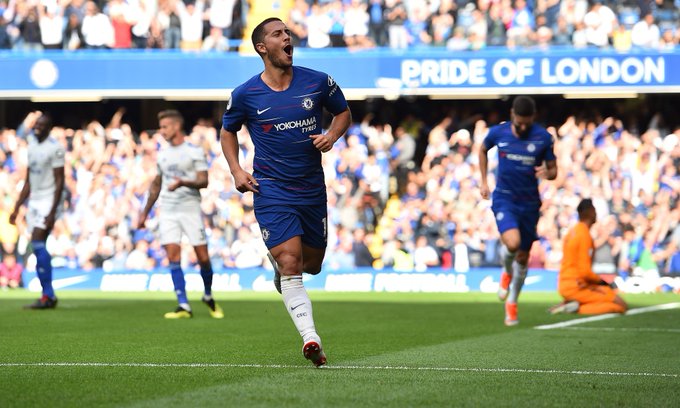 Hazard’s first goal was probably the pick of the lot when he drifted past Joe Bennett with a cheeky touch before unleashing an unstoppable and precisely accurate shot into the far corner from outside the area. It was not meant to stop there as he scored following a goal-mouth scramble inside the penalty area just seven minutes later before making no mistake from the spot in the 80th minute to grab the match ball.

The 27-year-old has been the subject of interest from Real Madrid for quite some time now and it only feels like a matter of time until the fax machine calls out for his name but until then he is Chelsea property and it is assured that he will continue to stake his claim as the best player in the league with performances like the one against Cardiff.