Breaking news: Buffon will retire at the end of the season – the details 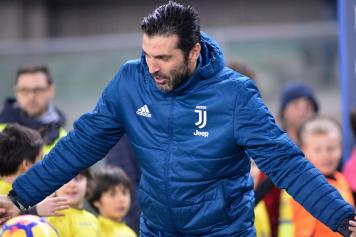 It now seems certain that Italian goalkeeping legend Gianluigi Buffon will retire at the end of the current season. Gazzetta dello Sport claims that the 40-year-old has had time to reflect and assess his future and that his call-up to the Italian national team for the friendlies against Argentina and England, are preparing him for life working for the FIGC.
Buffon is now expected to take up a role within the new set-up at Coverciano and will work on the coaching staff of whoever is appointed as the new head-coach.
The pink journal understands that the only decision that now needs to be made, is whether he will be play a technical or representative role within the organisation.
It’s also believed that Andrea Pirlo will also be drafted in to the new set-up and that Buffon’s farewell game for the Azzurri, will be the one against Holland in Turin, on June 4.
Loading...
Post Views: 266
Continue Reading
134
Share FacebookTwitterGoogle+ReddItWhatsAppPinterestEmail

Breaking news: Chelsea have understanding with top manager to take over from Conte in the summer, ending PSG’s chase for him