Breaking news: Barcelona’s season will be defined by seven games in the next 22 days

Barcelona are preparing for a run of seven games in 22 days that starts and ends with matches against Sevilla. If everything goes to plan, they could come out of what coach Ernesto Valverde has dubbed “the most decisive phase of the season” having won two of the three trophies they hope to win and be well on track to winning a third treble in a decade.

It would take a monumental collapse for Barca to throw away La Liga now. Going into Saturday’s game at the Sanchez Pizjuan, they sit 11 points clear of Atletico Madrid and 15 ahead of Real Madrid with just nine games left. They have four games in Spain’s top flight over the next three or so weeks and it’s not unfeasible that if they win them all — there’s a Madrid derby in that time, too — they will be crowned champions. The worst-case scenario, should they win them all, would leave them still 11 points clear and with just 15 to play for.

Of course, they could lose at Sevilla, a traditionally difficult place to go, but will they also lose at home to Leganes? And to Valencia? And away at Celta Vigo? It’s a lot to ask for the chasing duo in Madrid considering this is a Barca side on a record-breaking run.

Valverde & Co. are unbeaten through 29 league games this season and talk has already turned to the idea of them becoming Spain’s first-ever “invincibles.” Meanwhile, including the seven games at the end of Luis Enrique’s reign last season, they’ve not tasted defeat in La Liga in 36 outings dating back to last April, when they lost at Malaga. The league record, set by Real Sociedad, stands at 38 matches. 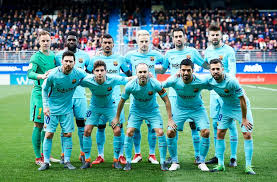 Perhaps those records are among the reasons Valverde is resisting the urge to rotate. He says he will not “speculate” and will travel to Sevilla with the idea of picking his strongest team and winning the game. The cushion at the top will be not be taken for granted. It means Lionel Messi is traveling south despite a hamstring problem. He may not start, though, with Valverde having to decide if it’s worth the risk considering the league table. Sergio Busquets and Lucas Digne will miss the game with injuries but Nelson Semedo and Denis Suarez return from knocks of their own to retake their places in the squad.

It would be easy for Valverde and his players to get distracted. With such a big lead, it’s only natural that minds may be tempted to wander to Wednesday, when Roma are due at the Camp Nou. Win that and Barca will take a huge step towards reaching the Champions League semifinals, a destination they’ve not been to since they won the competition in 2015. They travel to Rome a week later, in-between their league games against Leganes and Valencia (both at home) and will hope to arrive in Italy with a handsome lead and the pressure off.

The 22-day period ends with Sevilla again, facing them in the Copa del Rey final at Atletico Madrid’s Wanda Metropolitano on April 21. With the league title almost sewn up, it represents the chance to tie up the second part of a treble that they also won first won 2009 under Pep Guardiola and repeated in 2015 with Enrique.

But the goalposts move so quickly in football that the next 22 days may be followed by an even more decisive run of games. A win against Roma would mean no free midweeks for Barca until May, with a potential Champions League semifinal preceding the Clasicoagainst Madrid at Camp Nou at the beginning of May.

“We have enough players to face this final phase of the season,” said Valverde on Friday when asked if he felt his squad had the depth to complete the treble. “We are now in the most decisive moment of the season. April is a decisive month. It’s now about corroborating everything we have done up until now.”

Breaking news: Lionel Messi Will Be in the Squad for Sevilla Clash

Breaking news: Why April can be the month of redemption for Arsenal