Breaking news: Barcelona Could Be Without Lionel Messi, Sergio Busquets And Gerard Pique This Weekend 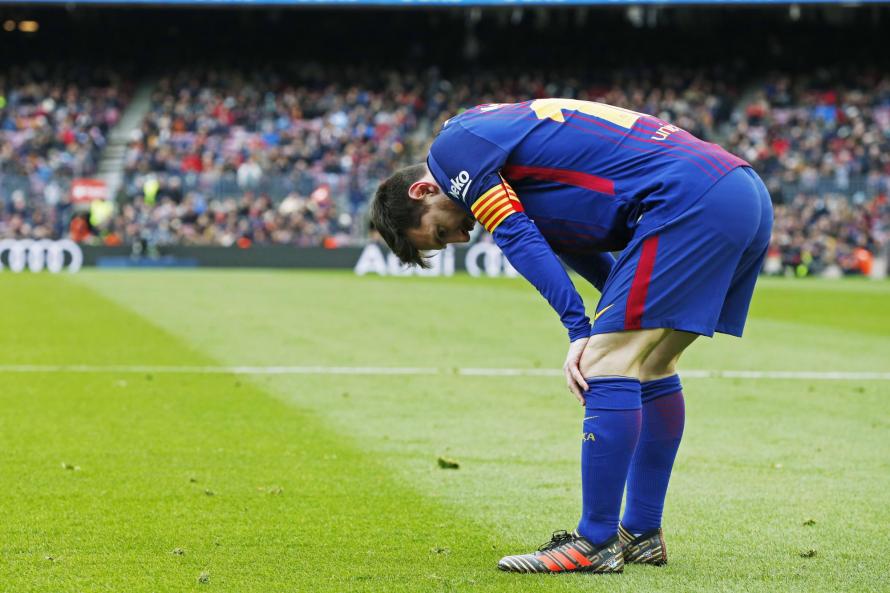 Lionel Messi didn’t feature for Argentina in their recent friendlies

Gerard Pique holding his knee during the friendly vs Argentina, Lionel Messi not even playing in the fixture, Marc-Andre ter Stegen with a knee issue… Barca’s big names are getting crocked at precisely the wrong time of the season, not to mention Sergio Busquets is still out.

Interestingly, it was at this stage last season when the Blaugrana ran out of steam, the last international break of the campaign upsetting the apple cart.

Lightning appears to have struck twice as the Catalans head to the Ramon Sanchez Pizjuan for what is, on paper at least, one of their toughest domestic assignments left this season.

A full house is guaranteed, and Barcelona will have to be at their very best to come away from Andalusia with at least a point.

Sevilla are buoyed by the return of Jesus Navas, out since February, and they have enough about them in an attacking sense to cause Ernesto Valverde’s side problems.

Pablo Sarabia is suspended for the hosts who are also likely to be without Sergio Escudero.

Where Barca can profit is by taking the game to Sevilla. As has been seen against Betis, Real Madrid, Atletico Madrid and Eibar – who all scored five against Vincenzo Montella’s side – if the visitors seize the initiative, Sevilla will crumble.

One of Barca’s hardest remaining games, if they emerge unscathed here, they’re virtually home and dry as far as the league is concerned.

Goals galore in the Canary Islands

Just over two years ago, Paco Jemez’s Rayo Vallecano side were humiliated 10-2 by Real Madrid, in a match where Jemez said he felt ‘abused.’

Given his predicament at Las Palmas, and despite his penchant for swashbuckling, attacking football, he’d be well advised to have his side play a similar game to when the Canary Islanders hosted Barcelona.

Any gaps will be exposed by a Real Madrid side that, whilst accepting they’re out of the title race, are intent on recovering some pride.

With no injuries to their international players, Zinedine Zidane should be able to pick from a full-strength squad, but one that is still likely to be without Spain’s hat-trick hero, Isco.

As the player himself said; “Am I the problem? I don’t know how to convince Zinedine Zidane.”

Alejandro Galvez is suspended for Las Palmas, whilst the busy Etebo has a thigh injury and is unlikely to feature.

Backs-against-the-wall isn’t a description we would normally use for a Jemez side, but unless he wants to be well beaten, that’s the tactic he needs to use to frustrate an improving Los Blancos.

Jan Oblak might not be risked for this one, the goalkeeper’s groin injury not too serious it would seem, but with much tougher games ahead, Diego Simeone may prefer to rest the custodian.

Filipe Luis won’t be back until May, Juanfran won’t play and neither will Thomas Partey. With Antoine Griezmann and Vitolo both suspended, Atletico could have a disjointed look about them.

However, they still have enough talent in the squad to cover for what little threat Deportivo are expected to bring.

Clarence Seedorf has had a terrible time of it in Galicia, and with 10 players potentially out too – including his best defender and best two attackers – the Wanda Metropolitano isn’t a stadium where he’ll get his first win since taking over.

Their only hope is if Atleti overreach themselves in going for a victory they absolutely need to keep them just about within touching distance of Barcelona.

Battle of the Basques at Ipurua

Eibar have slipped out of European contention for now, their one win in the last six harming their chances.

They do still remain just two wins from six, however, so this Basque derby has a lot more than local pride riding on it.

After Eusebio Sacristan was sacked at Real Sociedad, this game represents Imanol Alguacil’s first in charge.

Thus far, including matches in the Segunda (Second) Division between the sides, Eibar have never lost at Ipurua to La Real, so Alguacil can cement an immediate legacy with a much-needed victory.

Willian Jose is the obvious dangerman for the visitors, and he will have studied how Real Madrid battered Eibar aerially, which is often where he does his best work.

With a decent support from midfield, he could be the matchwinner in another game where both sides are beset with injuries and look set to field patched-up starting XI’s.

First season ever in the top flight, and the second smallest club in the league and on course for Europe. What a story!

What’s more, they full deserve their lofty position, and victory over a struggling Levante coupled with Sevilla failing to beat Barcelona, would see Girona leapfrog the Andalusians into sixth spot.

Levante certainly aren’t out of the woods yet as far as relegation is concerned, so will be scrapping for their lives until they are mathematically safe.

That may upset the expansive style that Pablo Machin’s Girona like to play, and as a result the game could be a lot closer than many are predicting.

With Portu and Cristhian Stuani in such devastating form in front of goal for the hosts, it would be a surprise to see neither register, but how often have we see teams at the bottom take points in these games.

Breaking news: ATLETICO MADRID want to raise Antoine Griezmann’s release clause to a staggering £262MILLION in order to deter Manchester United and Barcelona from signing him.